Some Repubs Foul The Gene Pool 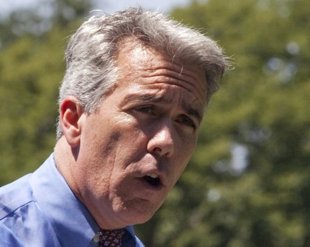 As a conservative Independent I find the large majority of liberals to be nutty as a fruitcake.  Their political philosophy is so lacking in common sense that I sometimes wonder how they came to their opinions.  It certainly wasn't using rational thought.

Conversely, I find conservative thought more rational, better thought out, and far more applicable to the issues we face in real life.

Then we have folks like Congressman Joe Walsh from Illinois and Senate Candidate Aiken from Missouri flapping their gums and saying that abortion is never, ever justified.  Congressman Walsh was the latest as he said recently that no medical condition ever justifies aborting a child.  None.  My guess is that about 98% of America's doctors, both Democrat and Republican, would disagree with that diagnosis.

But here's the real problem.  When Akin and Walsh speak with such wild-eyed idiocy it damages all Republicans, even those who believe that abortion in the case of rape or incest or the health of the mother are justifications for aborting a fetus.  In these times the far left will jump on anything they can grapple with to attack Republicans and divert attention away from a woeful record of political leadership.  They take the idiotic sayings of Akin and Walsh and paint the whole party with the same brush.

Ironically, when Akin and Walsh mouth these blatherings they actually promote more abortion by diverting attention, and the associated criticism, of welfare druggies who are known to abort as many as five babies in as many years.  While moderate women are so grossly insulted by far right wing pro-lifers, their attention is diverted sufficiently that  the abortion clinics can plow on with the deadly practice of murder with little criticism.

Will this hurt the election chances of other Republicans?  You damn right it will.  It's one thing to say you're against abortion but it's quite another to say that you'll not tolerate it to save the life of a mother, or to prevent a 13 year old from bearing Uncle Sammy's child!  I've written often of the extremists on both sides of the political spectrum who do severe damage to the reputation of their respective political parties.  There is no better case than the issue of abortion.

So, if Mitt Romney were to lose the Presidency by being looped in with the mad hatters there will be pain and suffering among conservatives for a long, long time.  And, sadly, they will have insured the election of a Socialist who believes if a woman wants to abort five or ten times, well, that's just fine with him.

Extremism on either side is risky at best.

I’m a fundamental conservative, but when well-meaning folks from the right go too far, we suffer a backlash that is difficult to deal with.

This can be found in almost all areas of political discourse, not just abortion.

Economics, international relations, budgeting, domestic prosperity and tolerance of others need to be tempered with common sense, good manners, and reasonable alternatives.

Agree SFJ; except for the economy. I guess I'm a conservative extremist on the economy because I don't see any other way to fix these massive deficits unless we take an extremely hard line on entitlements.

For example, I don't believe we ought to raise even a dime in taxes until we see the waste, fraud and abuse stopped. Each time we've ever made a deal with the Dems to raise taxes in exchange for spending cuts, we get the higher taxes without any meaningful cuts.

Thanks for reading and taking the time to comment.