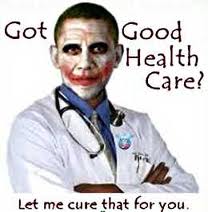 
Has anyone wondered why seniors haven't bought into the Obama campaign's lies saying Romney's policies on Medicare threaten them?  Perhaps it's because Obama's policies are far worse!

You see, seniors are already running into problems in getting health care as both Congress and Obama has done much to damage the relationship seniors have with their personal doctors.  Democrats in Congress, in order to fund more freebie health care for their welfare constituents, have been ripping off funds that seniors paid into the Medicare Trust Fund.   Until Obamacare raised its ugly head, Medicare was paying $60 dollars for a doctor's visit.  Thanks to Obama stealing $716 billion dollars from the Medicare Trust Fund Obama plans to pay doctors less than $30 to see a Medicare patient.  That is even less than what Medicaid allows for a doctor's visit!  Accordingly, a report from the Centers For Disease Control over half of America's doctors say they will no longer accept new Medicare patients.

The following illustration was taken from the CDC's own site and is based on actual "real world" practices.  Note that the most liberal state in the nation, California, is actually experiencing a decline in doctor participation in Medicare, same with Florida, and with many of the so called liberal "blue states". 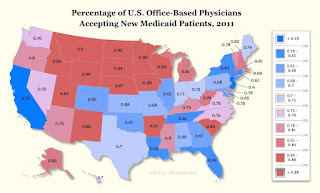 It is no surprise then that seniors, having seen the real world results of the first assaults on Medicare, are not buying Obama's golden toned reassurances.  And when one looks at the out years it becomes even scarier because the real onus on Medicare does not occur until 2014 when that $716 billion dollars is ripped out of the Medicare Trust Fund and re-allocated to pay Obamacare premiums for another 30 million government tit-suckers who have learned to game the system!

Finally, while Romney gives seniors the option of sticking with the traditional Medicare program, or opting for a private voucher program where they choose their own provider, Obama says "hell no!..."I need that bread to pay for my voters!".    Seniors also know that Obama wipes out Medicare Advantage which allowed some 30 million seniors to buy secondary insurance to ease the pain of hospital co-payments.  But, of course that doesn't go into effect until after Obama gets reelected!

The grand theft of Medicare is just one of the many lies this Chicago socialist has inflicted on the American people.   Come November 6th let's see if there are still enough folks willing to foot the bill for his socialism or whether voters send him back to Chicago.

More good news from the "You Aren't Leaving This Board" front! My mother, a devout Catholic, read to me from her church bulletin of last Sunday, this is the first time, according to my Mom that she has ever seen such an entry into this weekly. The subject, obama and his tenuous reelection. The church strongly urged all members to vote Romney because of this presidents position on abortion, euthanasia and its implementation through obamacare! The article was very detailed and strongly worded. My Mother is not only a very devout Catholic but she has also voted a straight democrat ticket for her entire life (87 yrs.). When she finished reading the church entry she told me, again, of her commitment to vote for Romney but she is also going to change her vote with regard to any changes in Senate, House and State Gov't. offices to a straight Republican ticket. My father until his death and our whole family have been trying to get my Mom to change her party affiliations forever to no avail. Obutthead serves one term at the helm and look; A MIRACLE!!

All I am saying here is you had better buy some new pens and paper, your going to be writing here for several more years into the future, and our country may yet get another chance if Mr. Romney is all he is selling himself to be!

Morning Ken. I had a bad moment this morning. I woke up and turned on the TV and it was defaulted to MSNBC. They were crowing about the latest polls, showed Obama leading Romney by 5 in Ohio. Then I went online and read Real Clear Politics and their poll today and saw Romney continues to gain points.

Re; the church newsletter, one of my readers sent me a link to a video produced by the Catholic church, it advocated for Catholics nationwide to vote Romney, citing Obama's assault on freedom of religion as one reason.

God Bless your mom...that's one more for the good guys!

You said your map shows states where doctors are not accepting new Medicare patients, yet the legend on the map clearly states it is a map of doctors accepting new MEDICAID patients.

That's correct Rednready, the wording was wrong but the point was made; as Obama reduces payments to Medicare patients below the already low payment of Medicaid patients, Medicare patients will find it hard to find a doctor that will take them.

That's the end result of Obama taking that $716 billion from Medicare through a reduction in payments to docs and hospitals.