Cheering The Death of A Liberal Rag 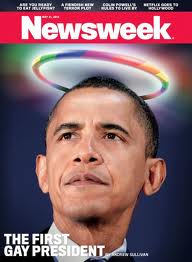 Well, we recently learned that Newsweek will cease printing a paper edition of the weekly news magazine in December.  Good.  Newsweek is a prime example of the madness of liberals; they would rather die in some weird form of martyrdom than clean up their act and offer unbiased and objective reporting.

Newsweek began printing in 1933 by a former Time Magazine staffer.  At the height of their readership  over 4 million Americans read Newsweek weekly.  However, in the mid 1990's the magazine began turning into a "publication of liberal advocacy" rather than sticking to a proud tradition of objective reporting.  Like so many other liberal media outlets, readers began having to sift through speculative opinion in order to garner the facts.  Circulation began to decline.

Rather than restoring Newsweek to straight reporting, Newsweek continued the biased championing of all things liberal.  The situation worsened in 2008 as Newsweek, with a failing circulation base, found itself unable to compete with other news gathering agencies and opted to transform the publication into a "news comment" format.  Of the 10 regular contributors to Newsweek's content, only two are considered to be moderate to conservative in political persuasion.  The "tyranny of 8 liberals" turned Newsweek into a liberal rag advocating for The Anointed One and his converts.  Not surprisingly readership dropped in half in five short years.

With the exception of the Obama/Reid/Pelosi regime, few readers are mourning the death of this 75 year old publication.  Why mourn for something that died 15 years ago when the concept of objective reporting was surrendered to the liberal agenda.

Tina Brown, liberal sister to Nancy Pelosi, has been running Newsweek for awhile now.  She says the publication will continue as an on-line paid publication.

I suspect Tina and company will find themselves quite lonely in the land of ether.  Only hard core liberals are willing to pay to be told "how to think".