Inequality In A Safeway Store 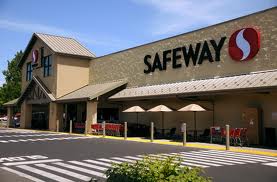 Liberals have been campaigning against inequality for a century.  For a time that campaign was necessary.  Then, the federal government implemented preferential racial quotas for free education and employment hiring, expanded social welfare programs, established a coddling educational system that says it's okay not to study in class, or do homework, or seek a skill that might provide a living wage.  Big government then altered the tax code to directly encourage irresponsible breeding.  Not only are breeders supported by food stamps and welfare but are given tax deductions and child tax credits as reward for a hyper active and irresponsible sex life.

So, when one walks into their local Safeway grocery store a microcosm of American society is there for anyone to study.  Let's assume there are a representative 100 people in the store.  One of that hundred will saunter over to the deli, order up some lobster bisque, a pound of calamari olives, and perhaps a pound of beluga caviar, before heading over to the butcher to pick up five pounds of filet mignon.  He then heads to the checkout counter and takes out his money clip to flip a couple of hundred dollar bills on the counter for the evening dinner.  He's that "one percent" that the occupiers talk about.  And he doesn't feel a damn bit guilty because he's forked enough over to Uncle Sam to pay 70% of the tax bills.

Then there's a group of 49 other people in the store.  They are "blue collar" working people.  Their cart is full of hamburger meat, off brand hot dogs, store brand vegetables and Hamburger Helper.  They are running a calculator and counting every penny as they shop.  At checkout they will not relax until they see they have enough to pay the cash register total.  They know they have to be careful so that they have enough to pay the rent, electric and water and gas bill, and gas for the car to get to work.  The "working 49" can't even dream of sending their kids to college...or even take them out to McDonald's.

The other group of 50 are more light hearted, worry less as they roll down the aisles.  Their grocery cart has steak, roast and hamburger, brand name cold cuts, potato chips, cases of Coca Cola and Pepsi and gallons of milk and ice cream.  When they reach the check out they whip out a Food Stamp card and they're on their way home.  Home may be a government provided Section 8 house, the address where they receive their welfare check, the address where the IRS will mail their $7,000 or $8,000 dollar Child Tax Credit "IRS Welfare" check.  They need not worry about paying full price for any of their utilities because the utility companies gives them a "poverty discount" and just bills that "middle working 49" up above as part of "the working man's utility bill."  The group of the "happy 50" have no qualms about sending their kid to the doctor for the sniffles because they're on government provided Medicaid (paid for by the working 49, who can't afford health care for their own and don't qualify for Medicaid cause they work) and even dental care, also provided.  The "happy 50" can't even be charged a co-pay for doctor's visits or hospital care.  The "happy 50", thanks to a benevolent government can take their kids out for fast food and pay for it with their EBT card.  They can even send their kids to college for reduced tuition or even free, depending on the color of their skin.  And everyone of those "happy 50" pay not one dime in income tax.

2012:  The New Inequality.  Reward the "takers" and punish the "makers"......until the "makers" are no more, having surrendered to the forces of big government, and learned that the free ride gravy train is a lot more pleasant than trying to work for a living.

Just a few observations from the aisles of a Safeway store.

I see it all the time. I was a substitute teacher at Richmond, CA on Friday (yes, there was a lockdown at Homecoming due to a shooting). On Friday I was to show a documentary on the beginning of the Civil Rights Movement, from the murder od Emitt Till to Birmingham. I cried as the students 6 decades past that time, played w/ipads, texted, laughed, bumped and grinded to the current music and said, "I don't wanna watch this shit'. If only those people from the past could walk into todays classroom....so sad.

Living; Blacks turned away from the teachings of Martin Luther King and the old civil rights leaders long ago. Were they to pay attention it would shame them.

They have learned that a life of "victimhood" is quite profitable and easy. Living up to higher moral standards is just too difficult.

And why should they? Big government rewards the takers and punishes those who produce.

thanks for your comments.

Don't forget the illegals that pull up to the wic store in a $50,000 Escalade. The man works for cash while the woman stays in all the lines for free government giveaways. At least here in San Francisco they do.

Same is true in Phoenix, Tony...also the Food Banks.