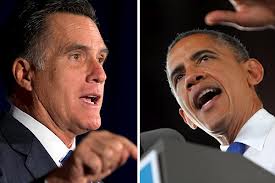 Well, the debate just ended.  I have no idea how the rest of America rates this one.  Personally, because I was seeking substance, I believe Mitt Romney won this debate going away.  While Romney fleshed out his 5-point plan by giving more specifics on his solutions, Obama offered more of the same.  For example, Romney advocated for expanding our capacity to generate clean coal, opening up the oil pipeline from Canada, advocating for alternative energy, but having those efforts coming from private enterprise in lieu of having the government invest in losers like Energy 1, Solyndra and other Obama campaign contributors.  This point worked against Obama as still another solar battery company went bankrupt on the morning of the debate.  Take one point away from Romney for not bringing that fact up in the debate.

Romney scored again when he pointed out that Obama had cancelled 14% of oil drilling contracts on federal lands and attributed that at least partly responsible for for America's $4.00 gas.  Romney landed another solid punch when Obama tried to take credit for increased oil production, only to be hammered by Romney by pointing out that the extra oil is being taken out of the ground on private land in North Dakota....and doing so despite Obama's EPA filing a criminal environmental suit because they killed a few birds!

To be honest, I heard nothing new from Obama.  Probably because his words were the same words he's been expressing in his 1,500 plus speeches he's made during his four years in office.  Obama offered absolute "0" on fixing Medicaid and Medicare or Social Security.

Perhaps Romney's hardest blow was when he pointed out that Obama was flying off for fundraisers while we were preparing to bring our dead Ambassador home.  This was preceded by Obama blaming this "act of terror" on a spontaneous protest and supposedly attributable to the anti-muslim video.  When Romney pointed out that Obama and company had stonewalled the truth for two weeks Obama got so angry he looked like the Black Militant that he is.  That was the point when the real face of Obama was evident to viewers....and it wasn't pretty.  Remarkably, Romney allowed Obama to go into a "clinch" and didn't nail him for the gross lies on the Libyan attack.

Finally, the only zinger I saw in this debate was when Romney pointed out to Obama that he too invests in Chinese stocks through his investment portfolio.  Obama could only grunt "well, I don't have as much money as you so I don't look at my mutual funds as often as you".

As was pointed out in CNN's reality checks, Obama's solution for reducing the debt, lowering our annual deficits and getting our spending in line was pure fiction.  I especially liked the CNN analyst's little "army men" showing how few "rich people" there are for Obama to tax..and how Obama's promise not to tax the middle class was an empty one.  The bottom line was this:  the only solution for getting out of this mess is to stop spending a trillion dollars more than we take in.

We'll just have to see what the Friday morning polls show.  The American people will judge who won this debate...and who wins on November 6th.