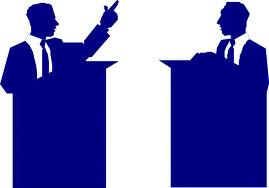 For the 75% of America who will not be tuning in to the debates this evening, here is your viewing choices for Wednesday, October 3rd.

"Everybody Loves Raymond"....Debra, in the heat of passion, knocks Raymond out of bed and on to the floor.  Raymond, sporting a bruise on his elbow, boasts about the injury to the guys at work, and attributes it to his superior lovemaking skills.  When Debra learns of it through brother Robert's tattling, Ray is in for a week of sleeping on the couch.

"Seinfeld"...."The Summer of George" episode.  Friend George boasts to Jerry that he finally scored with a potential bedmate and is reveling in his success.  After contemplating the meaning of his success, George decides that he will do everything opposite of his daily routine and declares this the "Summer of George", arguing that, by breaking out of set routines, he will achieve all of his dreams and ambitions...the episode concludes with George on a gurney in the hospital with a wrenched back, and lamenting that this was to be "The summer of George".

"The Waltons"....The Waltons rescue a downed airmail pilot, rally around to get his mail plane repaired, discover the mail pilot has deserted his wife and child, but at the last moment discovers, through the Waltons, that family can be a great thing indeed.

Turner Classic Movies Airs "The Best Man"...Classic political thriller about an overly ambitious Presidential candidate, champion of liberal causes, combs through the shadowy world of political "knee-breakers" to collect the dirty secrets of his opponent as well as the sitting President.  The villain is played with great skill by Cliff Robertson while the more morally upright Henry Fonda plays his opponent.  When Robertson attempts to blackmail the sitting President to win his support, he goes too far.  The President, in a fit of moral indignity, throws his support for a lesser known 3rd candidate who wins the nomination.

For the 25% of America watching the Presidential Debates tonight:

The two Presidential contenders will shake hands, exchange a pleasant greeting, then retreat to their respective podiums.  Both will be wearing red or blue ties and have a miniature American flag pinned to their lapel.  They will each be asked by the moderator how they plan to create jobs, boost the economy, resolve China's currency manipulation, reduce the ozone layer, reduce the national debt, assure our veterans are cared for, extend the life of medicare and social security, deal with illegal immigration, handle the Middle East crisis and heal the wounds of divisiveness amidst a strongly divided nation.

The two Presidential contenders will obfuscate, pontificate and advocate with varying degrees of generalizations.  Not a single position on a single issue will have been made clear to the pitiful 25% who make the effort to watch the debates.

Immediately following the debates MSNBC will blather that Obama "hit it out of the park".  This will be echoed by NBC, CBS and ABC, and all three network chiefs will order up a couple of dozen yellow roses be delivered to the White House.   Fox will point out that Obama was not as smooth with his delivery, having lacked a teleprompter to aid him.  Meagan and Bret Bahr will serve as objective observers while Juan Williams will gush over Obama's performance.  CNN will have their All Star Political Panel to analyze every word spoken during the debates, in a semi objective attempt to appear neutral, then declare President Obama the clear winner.

Well....at least that Seinfeld "Summer of George" episode is a doozy!

Post Debate: Boy! Was I wrong! Romney mopped the floor with Obama!