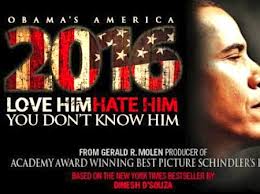 I really recommend that you not watch this movie alone.  It will scare the hell out of you and shake you to your roots.  The movie goes a long way in explaining how Obama became a Socialist.  It also reminds us how little we knew about this community organizer and why we have become so amazed by his failures as President.

For example, I did not know that both Obama's guardians, his grandparents, were raging liberals, although I knew his mom was a radical, and his dad even more so.   I did not know that Obama's grandfather introduced him to an avowed communist , high on Bill Clinton's FBI's "most watched" list,  and arranged for this communist to serve as Obama's political mentor for seven years.

Having learned more about Obama I have now come to understand how much Obama really does hate America, considers America a colonial power exploiting third world nations, and how Obama set as his goal, the destruction of America as a Superpower in order to suppress our ability to affect world events and thus elevating the third world to an "equality of nations" status.

In the four years since we first elected Obama we have been afforded a little more access to his past.  We can now see the video of Obama ranting against "the great Whitey" in Harvard Square twenty years ago.  We now know that Obama was deeply involved in Socialist activism while attending Columbia, and we now know what we didn't know before about why Obama hung around America haters like the Reverend Wright and the Students for Democratic Action terrorist, Bill Ayres, who bombed the University of Wisconsin and drew up plans for bombing the pentagon.  Four years ago we didn't know enough, so that too many fell for Obama's golden words.  We now know those words are simply the cooing to ease our fears, even as he works to undermine everything that America has traditionally stood for.

Perhaps now I understand why Obama has dedicated time and $2 million dollars to his lawyers to make sure his college records are never made public.  I suspect there are a plethora of anti-American, socialist overthrow courses that he no doubt excelled in.  Obama knows those records wouldn't play well with Middle America.

And in learning more about Obama, we now understand more why he embraces the Muslim world, even to the extent of trying to cover for them in the Benghazi massacre, offering an apology to them for their attack on us, rather than an ultimatum, and why Obama, upon his election, travelled to the Middle East on his grand "apology tour".  Now we know why he told Muslims in Egypt's Parliament that America was not "exceptional"; it's because he really believes we're not.

Perhaps the key piece of information we get from the movie is the development of Obama's psyche; how troubled his mind is, how he suffers from the lack of a father figure in his youth, how he came to idolize his socialist activist father, and how his greatest motivation is in succeeding in advancing socialism to make his father's dreams come to fruition.

Frankly, I don't understand how any American who has seen the movie, and who has a fondness for America, could dare cast a vote for Obama.

Now I understand the news reports of Americans standing up in theaters all across America and offering standing ovations for someone brave enough to tell the truth about Obama.

Please don't watch this film alone.  If you have even a moderate bone in your body this film will scare the hell out you.

I think I mentioned this before, BUT, here it comes again...MY sister took my 87 year old mother to see this movie. She has been a diehard democrat her entire life. This movie changed all that causing her to question all in that party. She is now voting a conservative ticket. Unfortunately she is not the rule, a liberal could look at that movie and call it all a lie. They could watch obama commit a henious crime like watch an ambassador be killed in cold blood then head out to Las Vegas for a little money grubbing and still say he's the best man! Look what Bush did, they say in answer. This has become a scary ugly country. I absolutely am at a loss anymore, there is no logic in anything political and sadly they control a huge part of our lives. Damn Shame it is. What can we do?