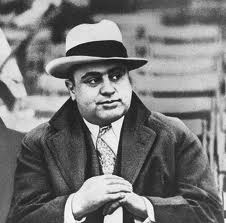 Get ready folks!  With 30 or so days to go before the November 6th election, and as Romney begins to close the gaps in the polls, prepare yourself for the dirtiest Chicago style politics you're likely to ever see.  Obama learned his political skills in the most politically corrupt city in America; a city where Democrats run out and register voters off the tombstones of dead people.  This is the city where, if you want a municipal or county job you not only vote Democratic but you also participate in strong arm gang thuggery to achieve the Dems' political goals.

So get ready America.   If you're in Obama's gang no lie is too big and no distortion is too much as long as you can hold on to the "golden ring".    In the first Presidential debate Mitt Romney was able to counter the Obama camp fiction but he can't be at every campaign rally to call the Anointed One on every charge.

Just as political largesse is distributed in Chicago, Obama has carried that same tradition to the White House, using taxpayer money to reward his campaign contributors, promising more power and money to teachers and auto worker unions and dropping $90 billion of your money on now bankrupt wind and solar companies.  Obama panders to gays, speaks "ebonics" when addressing a Black rally and elects not enforce our immigration laws to cater to Hispanics.  Nothing is too unsavory in the world of Chicago style politics.

Obama's operatives are even now meeting behind close doors to come up with dirty tricks and taking the art of lying and distorting to the level of "art".
Posted by A Modest Scribler at 2:00 AM

Everyone knows how the liberals are crying about how the rich have all the money and they are all eveil. Well in San Francisco this weekend we have the richest people in the world here for Americas Cup Racing. This being the most liberal city in this country, these liberal politicians and citizens are lining up to lick the feet of these very rich people to get at their money. You have to see this to believe it.

Frank, it is so very hard to relinquish the 'goodie bag', especially when others are paying the bills. The libs have hungered for power since the Supremes declared Bush the winner down there in Palm Beach County. They've now had Congress for six years and the White House for four...and they have a President schooled in the mean streets of Chicago so it's gonna be bad.

I wrote a few weeks ago that if Obama finds himself behind in the last two weeks, he'll order an air strike on Iran's nuclear facilities, just to get a 5 or 10 point bounce that America always gives the Commander in Chief at the outset of foreign hostilities...I truly believe even that is not beneath this thug.

Tony, the libs avowed hatred of the rich is just the game for the little people. They love the rich, are often rich (look at Nancy Pelosi and her banker husband) and just use the attack on the rich to win votes from their "perennial victim" supporters.