"The Chick Fil A Election"

Our liberal mainstream media is projecting a huge Obama victory come November 6th.  All the adoring folks at MSNBC, CBS, ABC and NBC are all telling you the election is over so Republicans need not even go to the polls; you can't possibly stop Obama from achieving a huge victory.  Before Americans have cast a single ballot the mainstream media has awarded Obama 303 electoral votes (270 needed to win the election).

I seem to recall another election that had the Democratic Presidential Incumbent with those same 303 electoral votes, and a huge 7 point lead in the Gallup polls just a week before the 1980 election.  His name was Jimmy Carter and all the pundits were predicting a huge win over a former movie cowboy named Ronald Reagan.

Come election day here's what the 1980 electoral map looked like on the morning after the election: 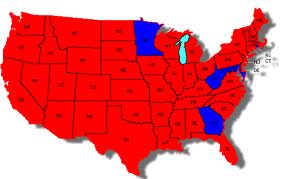 All that red up there were Reagan victories and the pitiful blue were Carter "consolation prizes", led by his home state of Georgia.

You see, the problem Democrats always have is a blinding arrogance.  They believe that just wishing it so will make it happen.

I seem to recall a few rude awakenings in the last few years too!  When Obama and Pelosi and Reid rammed Obamacare down our collective throats the Tea Party erupted and came out in droves to voice their displeasure.  And, only a few months ago, the Democrats decided they could punish the Chick Fil A restaurants because their owner advocates for family values and opposes same sex marriage.  Democratic politicians from Los Angeles to New York to corrupt Chicago heavy handedly decided they would destroy the Chick Fil A franchises.  One problem, Americans responded to the attempt to censor free speech by responding in droves to buy chicken sandwiches.  They lined up for miles around ever Chick Fil A restaurant in the nation and said "this is America!"...freedom of speech is still alive today!   Liberals were stunned by the size of America's response to an effort to quash free speech...they then hemmed and hawed, backed away, and dropped the subject as quickly as possible!

On November 6th far more is at stake than a fried chicken franchise.  We will go to the polls to decide whether we want a United Republic of Socialist States or a United States of America.  They will decide if they wish to be free, or have the heavy hands of government in every aspect of their lives.

We'll have several of those questions answered on November 6th.  We'll also find out if liberals were too blinded by arrogance to see what's happening in the hinterlands of America or if they were right in assuming that a government check can buy a vote.

I'm hoping for a hundred fold Chick Fil A type response on election day as Americans go out and prove that the only poll numbers that count are those that come on November 6th.  I'm hoping that Democratic arrogance has once more done them in!

Either way, I'll cast my vote, then head out to Chick Fil A for a nice American chicken sandwich.

I'll see ya there!

Hey I've noticed CNN playing the Prez debate morning, noon and nite. I guess they think obutthead won? They didn't do that when obutt clearly lost.

Yes, Ken...I don't know what the deal is with CNN..I know there News manager was fired a few months ago because of poor ratings. Maybe they think if they run the debate over and over they'll improve.