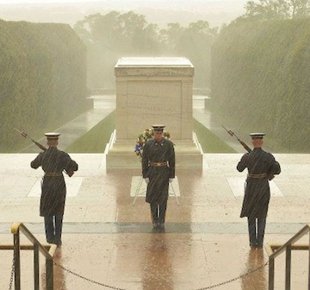 A Washington D. C. reporter this morning, having learned that federal government employees have been given the day off because of Hurricane Sandy bringing such brutal weather conditions to the area, was curious if the sentinels at the Tomb of The Unknowns would be relieved of duty from their 24-hour, 7-days a week, 365 days a year watch over their deceased brethren.  So, he called Arlington Cemetery and asked.

"We will not abandon our post", the reporter was told.  The veterans buried here, and known only to God, shall always have God's angels, and the U.S. military, to insure they are never left alone.  Those ram rod straight sentinels have been "on watch" since 1948.

Until in recent years, Americans, whether civilian or military, could count on America having their back.  That trust was first breached when President Clinton, on the golf course, became agitated that his game was threatened to be interrupted by a military attaché who approached him with a mobile phone.  The call was from the Situation Room and the military request was for an "okay" to mount a rescue operation for those soldiers whose helicopter went down in Somalia.  The delays, and the failure of not having a rescue plan resulted in the unnecessary deaths of our soldiers as they were dragged through the streets.  The Secretary of Defense and an Army general took the fall and the Commander in Chief, Clinton, survived, going on to have affairs with White House interns, pardon felonious campaign donors on his last day in office and recounting stories of success at various Democratic National Conventions.

Then, last month our Ambassador in Libya and three of his staff were killed by terrorists.  When Tyrone Woods heard of the attack he begged for permission to mount a rescue effort.  Someone in the Situation Room directed him to "stand down".  But Tyrone Woods, just like those sentinels at the Tomb of The Unknowns, was taught that America does not abandon Americans.  He defied those orders,  risked his career and gave his life to save others.   Though American forces were available a mere hour's flying time away, they too were told to "stand down".  When the smoke cleared, and when we ferried our dead home to Andrews Air Force Base, our leaders stood over the graves of those Americans and blamed the attack on an anti-Muslim video.  Our leaders over a period of two weeks, though knowing better, continued to deny that terrorists were responsible for American deaths.

As with the Black Hawk Down incident on Clinton's watch, someone else is left to take the fall for a massive leadership failure.  A navy admiral has been relieved of duties, even as our Commander in Chief, Obama, lives to offer still another apology to Muslims about a two-bit film.

So, yes, those soldiers at the Tomb Of The Unknowns will stand tall.  As they said today "we will not abandon them".  Sad that our civilian leaders do not have that same sense of dedication and honor.
Posted by A Modest Scribler at 1:28 PM