Jay Jameson Reporting  (Part 3 of the ALF Series of Reports) 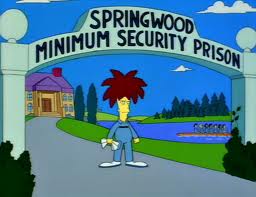 In an unexpected move American Liberation Forces (ALF) staged a bold daylight raid on the news studios of all the major networks in Los Angeles, New York, Chicago, Atlanta and Washington.  Scores of liberal mainstream news broadcasters were taken into custody and shunted off to a "liberal re-education camp" in Springwood, Texas, currently under control of the ALF Southern Command.

Household names like Wolf Blitzer, Dianne Sawyer, George Stephanopolis, Mika Brzezinski, Katy Couric, RINO Joe Scarborough, Mike Barnacle, Keith Olberman, Rachael Maddow, Andrea Mitchell, and the entire staff of MSNBC were among those taken into custody and transferred to Springwood for an intensive program of civics re-education.  Only two casualties  were reported during the raid;  Dan Rather broke a hip after falling off the Bronze Wall Street Bull in a senility-fueled attempt to escape, and far Left liberal reporter Chris Matthews, to escape capture, jumped to his death off the roof of Rockefeller Center.  Witnesses said he was screaming invectives all the way down.

We have learned that Bill O'Reilly has been selected as Superintendent of Schools for Springwood, with William Crystal of the National Standard assuming the duties of Director of Education.  Professors George Will, Thomas Sowell and Victor Davis Hansen are just a few of the professors named to conduct classes.

A copy of the student guide was given to this reporter which dictates student regulations as well as the class curriculum.

Some of the more notable highlights in the guide include requiring all students to stand, salute the flag and recite the Pledge of Allegiance prior to the start of each class day.  Some of the classes listed as prerequisites include:

1)  Audio-Visual:  A view of a large compilation of Ronald Reagan speeches; 1960 to 1990.
2)  Constitutional Principles; students must memorize the pre-amble to the Constitution as well as the Bill of Rights
3)  Tyranny of The Minority; students will learn that, in a Republic, the majority, not the minority rule and that political catering and pandering to political minorities contribute to the destruction of said Republic...and eventual Civil War to resolve those conflicts
4)  The First Amendment to the Constitution; students will learn that, with a free press, also comes responsibility to report all news in a fair and objective manner, and are forbidden from allowing personal biases to affect their objective delivery of the news.
5) The Fox News Phenomenon; students will be required to watch a minimum of 30 hours of Fox News broadcasting to learn how to program a diversity of guests and host analysts who represent all sides of the political spectrum, with special emphasis on the contrariness profile of Juan Williams.
6) The 14th Amendment; A Study.  Students will be required to read the 14th Amendment and study the context of it's authorship, both the era and political climate, so as to understand the 14th Amendment was never written to authorize citizenship for anchor babies born to illegal immigrants while in the U.S.
7) The Peril of Liberal Political Blathering:  Students will be required to view all 1,655 speeches given by Barack Hussein Obama and attempt to detect any substantial discussion of our nation's problem issues.  Successful completion of the course will be when students understand clearly that the speeches consist merely of self-adulation and pandering pontifications.
8) The Great Society Programs.  Students will learn that the Great Society programs,  established under the Presidency of Lyndon Johnson,  cost the American taxpayer trillions of dollars and created three generations of "victims" who rely on a government check, breed irresponsibly, ingest dangerous drugs, violently misbehave and live in family units where 75% of them are single parent households.  Journalists will be cautioned not to perpetuate Black "victimhood" by churning out sob stories about an uncaring government.

At the completion of the course, graduate journalists and broadcasters will be limited to working as apprentices in radio and television stations broadcasting at less than 10,000 Watts until such time that they demonstrate the ability to execute fair and balanced reporting.

Note:  Part IV of the ALF Reports will resume in a few days, after further coverage of the debates and election issues.
Posted by A Modest Scribler at 2:00 AM

I just have two comments or rather complaints about our new or rather reclaimed country. Bill O'Reilly is superintendent of schools? If the goal is to take back our country why put a moderate to liberal back in charge of education? As to reeducation on the 14th amendment, why not just eradicate those amendments so important to liberal activity? I think the 17th is another one. I just think a take over of this magnitude,why take a chance on falling back. I'm really thinking wishfully here. Go ALF Go!!!

Ken, Bill O'Reilly's great success ($28 million a year and the #1 cable show for ten years running) is that he's convinced you that he's "moderate". O'Reilly is not moderate; he's a right wing conservative.

When he's saying on his show that he "doesn't have a dog in the hunt", or there's "no spin", or when he brings up the modest merits of the liberal side, he's gaming viewers, especially any liberals watching.

He even irks me sometimes the way he goes out of his way to present the opposing liberal viewpoint, but don't you see? That's Bill's artistry! He has many convinced that he's moderate..and therefore credible as a "no spinner". But all one need do is watch his "talking points" session and you see he just literally destroys the liberal agenda.

Thanks for your comments. I'd be interested in why you think O'Reilly is moderate-to liberal?

I watch O'Reilly religiously and read all his books and most of his e-columns. I have watched the way he questions his guests and especially the way he questioned obama, a sad interview if there ever was one and he thought he grilled him. I knew as little coming out of the interview as going in.
I respect his opinion but I will not be convinced he is a right wing conservative and he even says on his show that that is not his bent. I will cede that he does seem to have a rather respected private life so he may be something other than the man I have come to know. That's why I think he is a poor choice.

okay, Ken...we'll run the bastard out at the first sign of liberalism....but keep in mind the ALF's peace terms are gonna be a son of a bitch so there's not much danger of liberalism rearing its ugly head any time later.

I think I would enjoy sitting on a porch chatting with you for hours about this. Sure have enjoyed this ALF project of yours. With regard to that O'Reilly fella, agreed at the first sign the SOB is relegated to cleaning toilets at liberal camp!

New Anaerobic toilets have been installed during the ALF project to relieve gas fracking from being on the public radar.The re education of cats imposed by the peace process is destined to be a fun one.