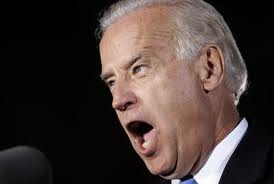 Last night during the Vice Presidential Debates Paul Ryan tried to have an adult conversation about our nation's problems.  It was a futile effort.  By CNN's account, Joe Biden interrupted Paul Ryan 82 times. When ole Joe wasn't interrupting  he was smirking and rolling his eyes and his facial expressions were that of someone bordering on senile dementia.

ABC's Martha Radatz, apparently not wanting to hurt the feelings of her wedding guest, didn't bother to curtail Biden's near constant blathering while Ryan wasn't trying to answer the moderator's question. At one point, when the clock clearly showed Biden's talk time was more than four minutes more than Ryan's and yet Biden was complaining that he wasn't getting enough time to talk.  In reality, if you count all of Biden's talking over Ryan's responses, Biden probably got three quarters of the entire time allotted for debate.  Perhaps, one of the most telling remarks of the night was when Paul Ryan turned to Biden after still another interruption and said "look, I know you're probably under a lot of stress tonight but it would be beneficial if you would try to stop interrupting".  It fell on large deaf ears.

In keeping with the Obama's usual campaign tactics, Biden held his end of the evil bargain.  While attacking Ryan on the Romney-Ryan Medicare plan Biden offered absolutely nothing to explain how Obama would stop Medicare from going broke in 2016.  That's a fact.  That's the non-partisan Congressional Budget Office's assessment; Medicare goes broke without a reform of entitlements, and yet the Obama-Biden plan is "no plan"; just keep cooing soothing words long enough to win re-election.

When Biden did offer a response, he lied.  While all the world now knows Obama and company failed to provide adequate security for our Ambassador in Libya, even as Congressional testimony from the State Department confirmed the diplomatic request for a Marine Contingent, even after finding out on the first day that the Libyan assault was terrorism,  and not because of a frickin movie, "Joltin Joe" claimed "they didn't know".

Biden took the same phony tact with respect to abortion and birth control.  He labelled Romney and Ryan as not being pro-women, and all because Romney and Ryan don't believe the taxpayer should have to fund birth control/abortion.  Biden went into "humble mode" and tried to explain the dichotomy between the beliefs of his church and his political position on the issue.  He attempted to portray himself as a good Catholic but has no problem with those women who abort as many as five times in a decade, and at taxpayer expense.  Further, Biden extended the Obama lie about not forcing Catholic organizations to fund birth control and abortions; he said "oh, we're not doing that; we're making the health providers to pay for that"...who the hell do Biden and Obama think are paying the premiums to those providers?  Just as with so many other issues, just muddy the waters and maybe folks won't notice!

I give the moderator a "D".  She spent way too much time on Afghanistan and far too little on discussing domestic policy, particularly jobs and the economy.  She also failed to do any moderating at all, allowing Biden to ride roughshod over the entire evening.

The first poll out shows Ryan winning the debate by 48% to 44% and CNN called it a draw.  I hardly think so.  The arrogance that Biden showed last night was the same arrogance that the Obama/Reid/Pelosi regime showed with ramming a trillion dollars worth of stimulus pork down our throats and the same arrogance demonstrated shoving Obamacare down America's throat.

Perhaps the six days that the Obama team kept Joe "sequestered" and out of the public eye, and supposedly preparing for this debate, drove old Joe over the edge.  He was weird, wacky and slightly more moronic than usual.

Yes, the flaming liberals probably liked Biden's buffoonery...I doubt that the rest of America did.

Note:  I thought a review of the Vice Presidential debate was important.  I'll resume reporting on the progress of the American Liberation Front (ALF) and the 2nd Civil War (part 3) on Monday morning.

Posted by A Modest Scribler at 1:30 AM

I'm encouraged by the comments I read at the various sites covering the debate. Some lib some conservative. The yahoo site's first scoring had biden at 50%, Ryan somewhat less and the independents at 19%, stupid. Overall, though the comments were the same, biden looked like a child, demented old man, weird, etc., etc.. Ms Raddatz certainly showed her alliances, that was just disgusting.

Today, after it's all done, I am reading of all of biden's lies. There were several. I don't know if anyone else caught it, it gave my wife and I a good laugh, was Biden when giving an angered answer to a question on unemployment he said, "what about the green jobs we still have four percent employment there". He caught himself and so did Ryan, smiling at him. Sad debate though. What a child, I was embarrassed for our country.

Ken, I can always tell when my blog hits home and really irritates the libs; it's when they start censoring me off a message board. They hate to hear the truth.