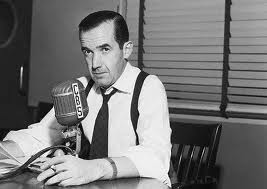 When CBS newsman Edward R. Murrow returned to America after covering World War II, he and CBS Chief William Paley sat down and drew up plans for making the CBS News Bureau the finest in broadcast history.  They recruited the finest reporters on the planet, staffed their foreign news bureaus and said to hell with the costs.  Murrow further insisted that CBS news be an independent arm from the entertainment network and hold no allegiance to any political point of view, except the pursuit of truth.

For over a decade that news charter remained intact.  And during that time the independence from the corporate bottom line allowed Murrow and company to reveal the awful truth about Joseph McCarthey.  It sent reporters into the streets of Birmingham to pry open the infested nests of Ku Klux Klanners.  It illuminated the painful plight of West Virginia coal miners and Mexican field workers in California.

Then, James Aubrey took over the running of the entire CBS network in the 1960's and began to look at the CBS News Bureau from a profit standpoint and deemed the corporate bottom line more important that a costly and independent news bureau.  Murrow died, but even then we had Walter Cronkite to tell us "and that's the way it is"...and so often it was.  Then Cronkite retired and the prideful, tempestuous and ambitious Dan Rather began leading the charge...and CBS integrity eroded even further.

One of the "old boys" is still left at CBS news.  Bob Schieffer is 75 years old now, got his big start covering the Kennedy assassination in Dallas and has worked his way up to "sage" status at CBS.  Just a couple of years ago he was called upon to do the CBS Evening News after Katie Couric screwed it up so awfully. 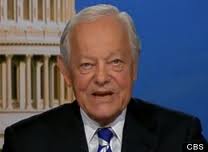 Now, Bob, with so little left to prove, will be moderating the 3rd and final Presidential debate of this 2012 election season.  Anyone who knows Bob knows that he's an old style Kennedy-Johnson Democrat, so we know where his political loyalties lie.   But I'm hoping old Bob can channel a little Edward R. Murrow this evening;  I'm hoping he will hold Obama's feet to the fire and demand an explanation for the Libya cover-up.  I'm hoping Bob can summon the kind of courage "Uncle Walter" had when he reported the corruption and cover-ups of the Vietnam war.  I'm hoping that Bob will not settle for "well, we're investigating this..we're looking into this" from Obama.  I want Obama to explain why the White House and State Department both stonewalled the American people, why they tried to blame a terrorist act on an inconsequential anti-muslim film, and why the pleas from our diplomats for more security were met with apathy and negligence.

And finally, though I know it's too much to ask, I'd like to hear old Bob ask Obama why he thinks America is no more special than other nations on the planet, how Obama can so easily dismiss the American glory of saving Europe twice in the last century, how we selflessly re-built an Aggressor Japan at our own expense, post war...and how we spent fully ten percent of our entire GDP for five years in re-building a war tattered Europe following World War II.  Most of us who've studied our history know that's pretty damn special...the unprecedented generosity of America is something pretty damned special.

Good luck Bob....may Murrow be your muse in moderating this debate.  May you summon the spirit of what was once the finest news bureau that ever existed.   And may we finally get Obama to actually answer one damned question.
Posted by A Modest Scribler at 2:00 AM

Well Mr. Schieffer has quite a lineage to answer to. I hope he conducts himself to that standard as well, it would be a refreshing change. I will not hold my breath, though, the man has drawn my ire a few too many times. He couldn't be any worse than Madame Crowley, assisting obama whenever he stumbled, helping him up when he was knocked down, sending his opponent to his corner and out right misstating facts helping obama appear to be much more than he actually is. If that would be the case, I pray for the future of my TV screen!

Looks more and more like your going to be with us for at least another four years. Romney seems to be looking better every day!!
I know I'm happy about that!

GO GIANTS, ONLY ONE MORE TO GO!!

Thanks, Ken. Yes, let's hope if Bob is toting transcripts, that he has transcripts for both candidates. Re, four more years of this blog, well, it is looking better but I think Romney's got to move the dial just a bit more in the last two weeks. He's going to have to overcome liberal voter fraud, perhaps far less than last time now that Acorn has been brought under control, but certainly some vigilance will be necessary; they've already caught illegal Mexicans trying to vote, and I see that some Brits tested the U.S. law against foreign donations; while Obama's campaign doesn't even ask where donations are coming from, Romney's system rejected those trying to donate from Britain.

Best of luck to you and the Giants...and don't be throwing anything at the TV..they're too damn expensive!

Make no mistake, Schieffer is an Obama man.