"A Tale of Two Senators" 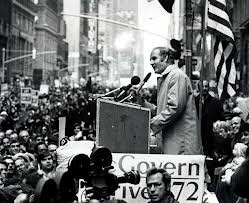 Arlen Specter, long time Senator from Pennsylvania, died this week.  In this same week we learned that former Senator and 1972 Presidential Candidate George McGovern has entered hospice care and is in his last days.

I couldn't help but contrast the lives, and life choices these two men made for themselves.  While Arlen Specter became addicted to the pomp and circumstance, and the lush life style of the U.S. Senate, and abandoned his core principles and even changed political parties to ride the wind of change, just to stay a Senator, George McGovern walked away from the political arena and spent the rest of his life "living among us".  He and his wife opened a bed and breakfast inn, only to see it fail.  Returning to public service, McGovern was named Ambassador to the United Nations for Food and Agriculture, an interest dear to his heart.  He wrote of seeing Europeans starving during his service in World War II and it affected him greatly.  He served under two Presidents in trying to reduce world hunger.

I wrote in an earlier blog of casting my first vote for President for George McGovern in 1972.  Having just returned from my third tour in Vietnam, and seeing the corruption of Vietnam's leaders, I was convinced that McGovern was right to oppose our continued involvement in Vietnam.  Also, I just did not like Richard Nixon and voted for McGovern, a man with a superior character.  Among my military comrades, I'm sure I was in the minority supporting George McGovern.  Many called him a coward.  I knew better.  George McGovern was a highly decorated bomber pilot during WWII and proved heroic in his service to our nation.

As I grew older, and as I began to try and support my family, I became chapped at supporting a growing victim class, seeing a good portion of my salary going to government programs corrupted by greed and apathy.  There is nothing like paying taxes to convert a liberal into conservatism.  So it was with me.

But I never stopped admiring a man who showed the character and courage to stand up and oppose a war that still had majority support.  Three short years later the American people would come around to McGovern's position, and we would flee Vietnam with our tails tucked between our legs, thanks to politicians and at no fault of our valiant military.   Character; George McGovern had plenty of that to spare.

So, while I offer condolences to Arlen Specter's family, and while I sympathize with anyone who has had to battle cancer for eight years, I can find little respect for a man who chose the path of least resistance just to maintain a cushy seat in the halls of the U.S. Senate.  Arlen Specter, making one last desperate grab for his cushy Senate seat by switching from Republican to Democrat, showed what the man was made of.  When America needed conservatives to right the ship, to stop Obama's wild spending spree, Specter opted to take what he perceived as an easier path.  And voters saw through his lust and turned him out of office.

George McGovern chose to face the headwinds of majority opposition because he believed he was right.  He followed his conscience and his only failing, in his opposition to a corrupt war,  was being way ahead of where other Americans were at a moment in time, and he took as much flak for that than he did in the cockpit of that WWII bomber.  That's what leaders are supposed to do, aren't they?

I could never accept George McGovern's liberalism.  He was far too hopeful that government can provide solutions without becoming corrupt.  But I will always admire the man's character and his steadfast belief and commitment to his principles.  Most admirable was that he never compromised these core beliefs just for the expediency of preserving a seat in the halls of the Senate.

Frank, I don't believe in hell; just either a "state of grace" in the after life, or a state of intense "life review" or contemplation, depending on the extent of our "sins". And someone like Hitler would would probably be languishing in a state of "septic shock" unable to achieve either grace or rise to the level of consciousness that enables contemplation. I once read that Buddhist's believe that monsters like Hitler, when entering an afterlife, are assaulted with every human hurt that they inflicted on others, to the point where they are rendered "vegetative" so painful is that boomerang of pain coming back on them.
I don't believe Arlen Specter is that kind of human; I believe he was an average guy who just got addicted to the type of hubris and sense of power and public coddling that we bestow on career politicians. It is a sickness that we allow to perpetuate by re-electing them over and over.

That was a very nice tribute to the man. Well done.

Thanks so much, Ken.