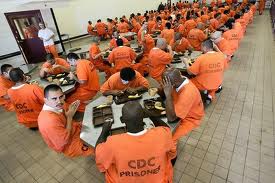 (AP)  In a stunning move, the American Liberation Front (ALF) began consolidating their strongholds in areas under ALF control and began a series of initiatives to stabilize the American populace and create safety and security for American citizens living in areas under their control.  ALF leaders, claiming huge victories in the 2nd Civil War, now report an army of American patriots surpassing 20 million.  In their first bold move this week, elements of ALF convoyed over 100,000 prisoners of war and prison lifers and death row inmates from state and federal prisons in areas under their control to a staging area in Long Beach, California.   The ALF then cleared Catalina Island and are in the process of ferrying these prisoners to Catalina Island, to serve as a temporary holding area.  ALF Commanders say these prisoners will be quarantined on the island and provided shovels, bags of crop seed and left to forage on their own.  Long term, ALF leaders plan to re-locate both prisoners of war from America's ghettos and career criminals to selective remote locations in the South Pacific as soon as their naval forces are sufficient to transport over two million prisoners to these locations.  Borrowing from the old British strategy of shipping society's dregs to Australia,  ALF claims they will no longer have American citizens footing the bill for the incarceration of millions of coddled prisoners.


The Commander of ALF in Southern California, responsible for all ALF forces maintaining border security along our southern border, stated in a press interview yesterday that over 300,000 ALF troops have been deployed along 1600 miles of the American-Mexican border.  Having notified the Mexican President that we fully intend to enforce our immigration laws two weeks ago, ALF troops have been ordered to shoot to kill any foreigners attempting to illegally cross out lawful borders.  ALF further contends that the concentration of fire power along the border has brought a complete halt to attempts to cross.  The Los Angeles Police Department reported that their drug units are hearing that an ounce of Cocaine is now going for $1,000 dollars an ounce and expected to go higher as Mexican drug cartels can no longer operate with relative impunity in the Southwest's highly militarized zones, now occupied by ALF forces.  Except for a broad swath of the Hollywood crowd, citizens are cheering the severe reduction in illegal drug use.

In related news, over 100,000 American citizens in Los Angeles celebrated ALF's deportation of 12 million illegal Mexicans from that area by holding a parade past City Hall.  Parade participants reveled in the drastic drop in murders, armed robberies, home invasions, car jackings, hit and run drivers, over crowded emergency rooms, raids on American food banks and a dramatic drop off in welfare costs.  Groups were already forming to paint over 1,000 square miles of graffiti marring the architecture of the city of angels.  Americans are moving rocking chairs back to front porches, no longer afraid of drive by shootings.  This reporter also noted a dramatic increase in employment opportunities as jobs previously held by illegal aliens are now being offered to American citizens.  Most noteworthy were jobs offered in the construction industry as employers began offering building and construction jobs at a living wage, with attractive benefit packages, just as they supported American families before the illegal invasion suppressed American wages in high skill jobs.

It is often said that California leads the way in national political movements.  ALF commanders were hopeful that is the case as they have already ended Marshall law and ceded rule back to elective leadership in California, Nevada, Arizona, New Mexico and Texas.   The citizens of those states have already pledged to never again elect leaders who advocate for law breakers, illegal aliens and those attempting to live off the good will of the state treasuries.   Further, all of these states have promised to enforce English as our official language and now require all official documents be executed in English only.

On the national front, ALF leaders continue negotiations with Congressional leaders and President Barack Hussein Obama to end this 2nd Civil War.  One of the hang ups in the negotiations has been the President's insistence that the city of Chicago be deemed a "no ALF zone" and that any negotiations be accompanied by amnesty for any crimes that he might be accused of, especially with respect to blatant circumventions of the United States Constitution.  Negotiations have been temporarily delayed since the President and his family are off on a golf holiday to Martha's Vineyard, to be followed by two weeks in Hawaii.

I am sitting in my rocking chair on the front porch waving at neighbors walking by while reading this beautiful story. I hope your dream should come to pass. I still am wondering why obama and his family are still in the picture and why ALF hasn't dispatched with them or placed them on a "golf courseless" island somewhere.

On a side note, I read an article by Ann Coulter citing Chris Matthews, who says that using the words "Chicago" and "apartment" is racist. He is also working on something that says "peanut butter" is also racist. I say ALF should just get an army of Caterpillar D11's and level that city of criminals. I love ALF!

Thanks Ken. In every good story there has to be a "tension"...in this case..it's Obama hanging on to the last like a third world dictator. Fear not, ultimately you will enjoy the ALF's peace terms.

As to Chris Matthews, he's also the guy that said the word "welfare" was racist. I would hate to think what he thinks about watermelon and fried chicken, both of which I enjoy immensely!