Obama And Candy; Both Bad For You 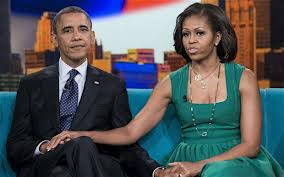 About the time our Ambassador to Libya was being dragged dead through the streets of Benghazi, Barack Hussein Obama was making plans to  appear on "The View" with wife Michelle.  In the days following the murdering of our diplomatic staff in Libya, Obama was flying off to Las Vegas for a fundraiser.  After raking in millions from a group of white men with collective Black guilt, he flew in to New York. Even as the Prime Minister of Israel was asking for a meeting in New York, to discuss the Iranian Time Bomb, Obama opted to tag along with Michelle to discuss frivolousness.  He even joked that he was just along as "eye candy".  Apparently The View held a higher priority than those daily intelligence briefs that Obama passed on for the last eight months.  Perhaps that's why he wasn't aware of the Intelligence Community's plea for a Marine Contingent to protect our foreign staff in Libya.  And since Bill was on the road campaigning for The Anointed One,  Hillary's attention was perhaps diverted with worry that Bill would be caught with one of his female minions in some campaign trail hotel room.
At any rate both Obama and the State Department seemed to be unaware of the diplomat's security pleas.

Instead, we had "eye candy" and Michelle schmoozing with Whoopi and Barbara and the crazy redhead.  Now, we all know that candy is not good for you, nor is Eye Candy Obama.  Both will rot your teeth and ruin your health.  Even Michelle says we ought to give up candy.

As far as candy goes I suppose Obama, with his massive ego, considers himself to be Godiva Chocolate.  But I think Obama is more like Cotton Candy, puffed up, full of air, colorful, and yet when you bite into it there's really nothing there, is there?

Americans love candy.  It's sweet to the tongue and always a nice treat.  Unfortunately, within an hour or two one is hungry for something more substantial.  Like candy, Obama gave us a brief moment of delight, followed by four years of hunger.

In about 20 days or so Americans will be reading the electoral "menu"...then we'll see if they order a steak....or if they succumb to another wad of cotton candy.

Funny you talk about candy. Here in California our state gives a edt card instead of food stamps for anyone that says they need it. And I mean anyone,I have a coworker that gets one and he makes $60 grand a year. The thing is Mrs Obama is worried about what we eat, and in this state they made the card acceptable at Mc Donalds, Burger King, and other fast food places. Then they go and punish Mc Donalds for giving toys in their happy meals. I just don't get it. When is this insanity going to stop?

Tony, you could cite a thousand things that liberals do and try to make sense of it....but you can't. They have no common sense and there is on rhyme or reason in what they do.