Debate Summary; I Was Wrong! 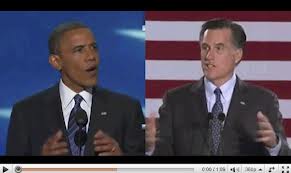 Yesterday my blog predicted that last night's debate would be "vanilla" and shed very little light on the candidates' issues.  I was wrong!  Last night Mitt Romney mopped up the floor with Barack Obama.
Romney used facts and statistics to literally destroy the Obama camp's six month campaign of lies and distortions.

First of all, "Professor Obama" and "Emperor Obama" seemed indignant at having to show up and explain his policies.  No longer The Anointed One, Obama, this time, was forced to try and explain away his 47 million Food Stamp Army, his 23 million fellow Americans who are unemployed and his failed policies to spur this recessive economy.

Obama failed to do so.  Though Obama was given more time to speak than the minutes allotted to Romney, Obama spent much of that time hemming and hawing and glaring angrily at his opponent.  Romney threw out facts and figures and offered solid and specific solutions to our nation's problems.

Some of the most devastating points made were surprisingly about health care.  Romney pointed out that, when 23 million people were unemployed, President Obama was more concerned about ramming a 2300 page socialist Obamacare program down America's throat.  Romney specifically ask the President "how could you ignore your fellow Americans suffering and expend two years of your passion to get Obamacare passed?"  When Obama tried to brag about his health care achievement Romney countered with the fact that the average health care premium has gone up 25% this year alone!

When Obama sneered and accused Romney of not understanding how hard it is to work with the opposing party Romney countered with the fact that he was successful in Massachusetts with a legislature that was 87% Democratic!  Romney further offered that, as President, he'll sit down with both parties to work out solutions.  Obama's tactic has been to issue "royal edicts" from on high and ignore Republicans entirely.

Each time Obama tried throwing out one of his "campaign lies" Romney met him head on, labelling it as a lie and offering specifics on any distortion Obama tried to make.  By the time we were half way through the debate Obama was angry, glaring at Romney, even failing to look Romney in the eye.

I hear the liberals on Facebook and Twitter were really giving it to Obama, saying that their anointed one "fail to show up".  They shouldn't be surprised.  Obama and his liberal army have been living on lies for months and when those lies were destroyed right before his very eyes Obama was unable to offer a response.

Finally, the Great Obama was lost without his teleprompter and without his adoring liberal press to throw hosannas at anything he utters.  Obama appeared to be a little boy who has just been told by his teacher that he's getting an "F" for effort.

Look at the polls closely in the next few days, folks.  I suspect the American people took a good look at The Anointed One and saw that the emperor had no clothes.
Posted by A Modest Scribler at 3:00 AM

Last night's debate was a pleasure to watch. I loved it. Loved, loved it, loved it. You are correct in saying that Obama came off as disdainful that he even had to show up. As if this is all just a waste of his time. He couldn't even hide his snarkiness from the moderator who dared tell him that his time was up. Romney, on the other hand, was confident and smart and proved that he knows what he's talking about. I feel as if new life has been breathed into this campaign.

Thanks for your comments; the CNN poll last night after the debate reflected Romney won the poll by 67% Romney to 24% Obama.

The only thing wrong with last nights debate was it was way too short. I took such pleasure seeing, "the one", get ripped over and over. Wow that was fun and I'm not a person who takes pleasure in the suffering of another.
When Romney ripped obutthead about the failure his 90 billion dollar green jobs campaign, calling out such specifics as Solyndra, etc, etc, and then quietly threw out the fact that nearly 70 percent of those businesses were obutthead campaign contributors and the pained look that instantly came across that asshole's face, perfection...Wow, I was just ecstatic to say the least. It was such a pleasure seeing the person who has been taking our country apart be most sharply put in his place. I am a happy man today, may be short lived but for today, I am soooo happy.

Thanks for the comments.

What debate were the 25% that thought Obama won watching. Obama got his ass handed to him with facts. It was like watching the Giants win the World Series again. The best part was I was watching it with liberal room mates.They could'nt even watch the whole thing. It was GREAT!!!!

Tony, there were a lot of liberals cringing last night; after swallowing the lies of the Obama campaign for months they had to actually face the guy they were lying about. When he countered those lies with facts the liberals had nothing else to fight with.

They damn sure couldn't use Obama's record to counter with!