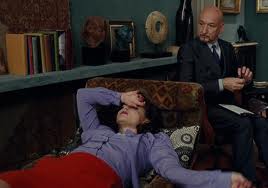 I have a feeling that Middle America is going to respond in waves on November 6th...and send millions of liberals to the therapist couch.  America has always been a "center right" nation politically, and they're getting damn tired of the arrogant "tyranny of the minority"; the liberal brown shirts who try to destroy Chik Fil A because the owner supports the traditional family, who tell you Gays will determine what America's values will be, who tell you what and when to eat and how much to drink, and how much to fork out to support liberal interest groups.

I believe Americans are tired of liberals rewarding the "takers" and punishing the "makers", that they are tired of Obama's class and race warfare game, of Obama's constant shifting the blame for his failures to others, of Obama's phony platitudes about transparency even as he initiates cover-ups of Fast and Furious and the Benghazi massacre.

I believe America stopped listening to Obama after about speech number 1,200 of his 1,675 speeches about hope and change.

I believe America recognizes that legalizing illegal aliens is both morally and Constitutionally wrong.  I believe the only ones who embrace Nancy Pelosi are the perverts in San Francisco who have awarded her a lifetime seat in the House of Representatives.

I believe America is sick and tired of living off unemployment checks and food stamps and just want a job that provides a living wage for they and their families.

I believe America finally sees Obama for what he is; simply another Chicago thug who uses the tactics of hate and anger and divisiveness to gain political favor.

I believe America knows that, rather than providing executive leadership, Obama has spent the last four years making campaign speeches.

I believe America now understands that Obama has never been a leader, was never qualified for the Presidency and should never have been elected the first time.

I believe America now recognizes that those Democrats in the Senate who have failed to present a budget for three straight years failed to do so because they are cowards...cowards who are scared to death that America will see how wasteful their socialist programs have proven to be.

SO....come November 6th America is going to give Obama a pink slip and a one way ticket back to Chicago.  America is going to shock liberals, blinded by their own ignorance...and send liberals flocking to the therapist couch with a bad, bad case of the vapors!

God Bless America!
Posted by A Modest Scribler at 2:00 AM

True, Frank. Heard a pundit this morning say that Obama is counting on all those green check receivers who voted early. He's claiming an 80/20 advantage over Romney. Hope he's wrong. That's just too much to overcome on election day.

From your words to God's ear. Hope you're right but we should remember we are facing an enemy (yes, an enemy, not an opponent) that will do anything to win, laws be damned. If Obama loses, look for massive demonstrations, complete with the requisite left wing violence. They will not accept defeat graciously. They don't know how.

Randy, I won't ever underestimate the liberal's thuggery. Wrote a blog on it already. Their strategy for the next few days will be for Obama to fly around the East coast dispensing our tax dollars on storm stricken states and act like it's coming out of his wallet. His minions will run around claiming that Romney intends to strip FEMA of any money to help folks and Obama is their true savior.

I also haven't rule out a strike on those Libyan terrorists or some other Commander in Chief macho to get a quick 5 point bounce in the polls.

Unfortunately I have to correct you just a touch Modest. If it was coming from Obama's pocket, it would stay right there and no money would be given anywhere. Liberals are great at giving away other people's money. But their own? Stays right where it is....

Frank, did you see how puny was Biden's charity contributions on his last tax return? Really pitiful.