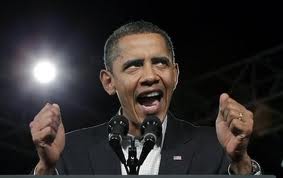 I just read that some of Obama's campaign strategists, for the next debate, are urging him to repeat the "angry candidate" portrayal that Mad Joe Biden displayed this past week.  God, I hope so.  While most of us know Joe Biden is a bit senile and very, very wacky, we are accustomed to his melodramatics, his brash rudeness and his arrogance brought on by spending his entire life as a pampered politician, so it wasn't a shock to us.

Conversely, except when Obama is addressing an all Black audience in "ebonics", he tries to come across as "reasonable".  Apparently, he still has half of America fooled into believing he's not the left wing Black radical who promotes race and class warfare, this despite his Trayvon Martin speech and his adulation of the Reverend "God Damn America" Wright (until it was unpopular to do so).  However, if he goes "Black Militant" on us, and allows us to see the "real Obama" I'll cheer and smile all evening.

This Kenyan chameleon, by turns, opts to speak in Harvard "lawyer-ese" or when addressing his Food Stamp and Welfare armies in urban Cleveland or Oakland or Baltimore, or the NAACP, speaks fluent race warfare ebonics.  Let's hope Obama shows his true character and unleashes his Chicago Thuggery and his Black and Socialist militancy on Tuesday night.

The moderator Tuesday night will be CNN's Candy Crowley.  I like her, and although I know her to be a liberal, she's never shown her political persuasion in any interview I've ever watched her do.  I posted on Candy's Facebook page and asked of her one thing; while I know she will ask for Obama's fix for the entitlement mess, I asked that she hold his feet to the fire and make him offer more than cooing words about how "everything will be all right".  If he says that, I want him to explain how that's going to happen without reform, since the Congressional Budget Office says Medicare goes broke in 2016 without reforms, while Social Security, already weakened by Obama's failure to enforce the payment of the payroll tax, won't last much longer than that.

But, honestly, I'd surrender all of my challenges if Barack Hussein Obama just comes out and acts as rudely and angrily as his VP did last Thursday.  I'd easily settle for letting Americans see a glimpse of the angry Black militant that spoke in Harvard Square a few years ago.  Obama, then not running for elective office, was preaching socialism and White hate.  Please, Mr. President, just "be yourself" come Tuesday night; that'll be more than enough for me.

Unfortunately, the article like so many Americans fails to acknowledge that Obama is African not black, as his family chose to immigrate to America, as opposed to black Americans who are the descendants of slaves who were forced here. Thus is would follow that acting like an angry black man wouldn't be in him since his family didn't go through 200+ years of oppression, which is what gave birth to the angry black man in the first place.
Also angry black men aren't usually half white & raised privileged like Barack.