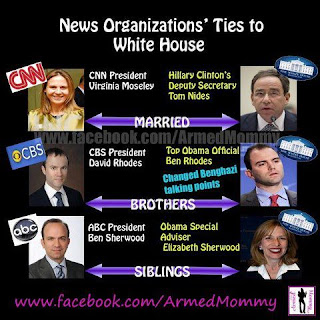 One of the reasons millions of Americans support Trump is because they can clearly see how the liberal mainstream media manipulates, manages and even censors the news in order to support the liberal agenda.
Does anyone believe it's just "coincidence" that NBC chose to release the Trump tape on the same day that Wikileaks published Hillary Clinton's highly damaging emails? If you believe that you also believe in the tooth fairy.
Real journalism died about twenty years ago. It is now virtually impossible for the American citizen to get an accurate picture of how our government is run, and whose corrupting the process. Here are just a few of the incestuous relationships:
ABC News President Ben Sherwood, who is the brother of Elizabeth Sherwood-Randall, a top national-security adviser to President Obama.
His counterpart at CBS, news division president David Rhodes, is the brother of Benjamin Rhodes, a key foreign-policy specialist.
CNN’s deputy Washington bureau chief, Virginia Moseley, is married to Tom Nides, who until earlier this year was deputy secretary of state under Hillary Rodham Clinton.
White House press secretary Jay Carney’s wife is Claire Shipman, a veteran reporter for ABC.
NPR’s White House correspondent, Ari Shapiro, is married to a lawyer, Michael Gottlieb, who joined the White House counsel’s office in April.
The Post‘s Justice Department reporter, Sari Horwitz, is married to William B. Schultz, the general counsel of the Department of Human Services.
[VP] Biden’s current communications director, Shailagh Murray (a former Post congressional reporter), is married to Neil King, one of the Wall Street Journal‘s top political reporters.
This list doesn’t even include those dating and sleeping together.
NBC, purveyor of those Trump tapes, is worst of all. That network has dozens of journalists and staffers who have intermarried with their government counterparts.
All of the mainstream media conspired to demean a very decent man in Mitt Romney four years ago. And Trump, with his many idiotic utterings have made it easy for the media to crucify him. The American citizen sees that media bias and see the unfairness of it.
I believe the media are cutting their own throats. Some day the TV screens are going to go dark because Americans are getting damned tired of being fed lies and twisted versions of the truth.
Sad. Damned Sad.

Posted by A Modest Scribler at 6:23 AM 4 comments:

Hello?  Anyone still out there?  Well, if you are you may want to skip this one.  It's so convoluted it might be a bit hard to follow.  You might just write this one off and dismiss it as a bit of a James Joyce "stream of consciousness" gibberish.  (Or accept that I'm offering a morality piece; the moral being "Hollywood is nuts because they live in a world the rest of us aren't privileged to share.)
Read more »
Posted by A Modest Scribler at 2:00 AM 3 comments:

The Despicable vs The Deplorable 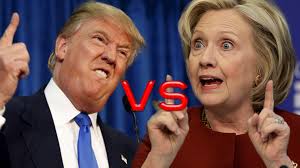 Donald Trump is the worst Presidential candidate to come along since George Wallace....except for Hillary.  None of us have ever seen a Presidential campaign like this one, and yet it is simply reflective of the populace in general, half of America hating Trump, the other half despising Hillary.  As Stan Laurel said to Oliver Hardy "well, this is a fine mess you've got us into this time".

Trump is the total clown.  He has failed time and time again to score a take-down against Hillary, despite being given hundreds of chances to do so.  As I watched the debate the other night I counted 85 "bon mots" that Trump could have used and absolutely destroyed Hillary.  Trump could not do it because he hasn't the mental or emotional capacity to do it.  And, worse, he couldn't even accept his "debate programmers" advice and stick to script, his sick personality totally incapable of accepting advice.  And what a disaster that would be if he ever got elected?  Can you imagine what a circus the Presidency would be with Trump totally ignoring our military leaders?  Haven't we already seen how Obama's Iranian cabal in the West Wing pretty much destroyed us already?  And you could be damned sure old Vladimir would have his hand hovering over the nuclear button as soon as Trump blurted some idiocy about "leveling a country?"

Were I Trump up on that dais, as soon as Hillary started talking about the Trump bankruptcies I would have immediately pointed out that Hillary and Bill, like Barack Obama have never had to work a day in their life; sucking off the public and political tit for all of it.

And when Hillary started laundry listing all the countries she flew around to as Secretary of State I would have reminded the American people about her lies about she and her daughter being fired upon...by a little girl with flowers.  Or I would have mentioned Hillary's silly Russian "Re-Set" button and asked her how's that reset button working out in the Ukraine, or in Syria, or imminently nuclear capable Iran...flush with $140 billion dollars flown over on a pallet of fresh U.S. thousand dollar bills.  And, yes, when Hillary began talking about Trump's disrespect for women I would simply have laundry listed the long parade of women Bill has bonked, while being savaged as "bimbos" by Hillary.  And, though Trump mentioned Hillary's emails he would have scored far better if he had just quoted FBI Director James Coney's indictment of Hillary and company's careless handling of our nation's most secret security information.  And when Hillary said foreign leaders are fearful of Trump I would have retorted, "well, they like you because they know you can be bought....they have the cancelled checks to prove it."

Hillary, on the other hand, was genius at exploiting all the idiotic Trumpisms that Trump has handed his opponent on a silver platter.   And, sadly, Hillary would have far fewer of those Trumpisms to quote if he'd just been able to shut his mouth after winning the nomination; if he had just talked about the deplorable economic conditions that still hamper our economic growth after eight years of Obama and Clinton.

The amazing thing about this whole Presidential campaign is that the vast 20% of the middle electorate; the Independents, the right leaning,  don't like Hillary; don't like her and don't like her policy proposals.  But, time and time again, Trump has chosen the "red meat" idiocies of personal attack, has all too often shown his psychological maladies and scared the hell out of folks who might forego Hillary and vote for him.

After watching this circus for a year I'm convinced that Trump has only about a 30% support base, with perhaps another 15% of folks who despise Hillary.  Sadly, that support, as tentative as it is, ain't gonna be enough to defeat the most despicable candidate to come along in years.

Posted by A Modest Scribler at 2:00 AM 5 comments: