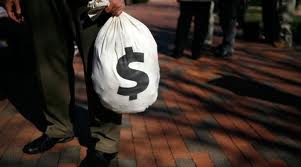 Memo To: MSNBC (All Staff)


Ladies and Gentleman of all NBC News Divisions

1.  Just got a call from the Prez.  He's hit on a good idea which should put him over the top come next Tuesday and he needs our help to make it happen.  Here's the plan.  The plan heretofore will be referred to as "Operation Barack O'Santa".

2.  Drop immediately all news coverage of the Benghazi fiasco.  Initiate immediately blanket coverage of President Obama addressing any and all speech and photo ops of our President offering aid and succor to Hurricane Sandy victims.

3.  Put our best reporters on the scene in New York City and Maryland and New Jersey, Pennsylvania and Virginia; cover President Obama's "compassion tour" as he offers up billions of dollars in federal aid to both individuals and states in any way affected by the storm.  I was briefed by the President's staff that there will be absolutely no refusals for even the most trivial of FEMA funding requests.

4.  Cover the President as he makes appearances at schools, subways, hospitals, homeless shelters.  Insure the mics are amped up to the max to capture the sense of angst and sorrow in the President's voice as he commiserates with those who have lost a home or a car or, if we're lucky, a loved one.

Note:  Under no circumstances are you to mention the massive disruption, and restoration delays generated by first responders having to divert their rescue efforts in order to support the President's massive motorcade requirements!

5.  When at all possible, identify the dollar amounts of aid going to each community affected by the storm.  (Caution:  do not mention that this aid is sourced from tax payers; make it appear this aid is coming right out of Barack's pocket!)  Note:  Cue up a "We Are The World" soundtrack whenever the President is in camera view)

6.  Gin up some story that Romney would have cut out all FEMA funds and let everyone drown; whatever you do, don't mention Romney loaded up his campaign bus with food and water and blankets and dispatched it to affected areas!

7.  As soon as Romney resumes his campaign, attack him mercilessly for ignoring our national tragedy and introducing politics in the face of so much destruction.

8.  Attention Chris Matthews:  I'm expecting you to carry the brunt of the load here; be sure and label Romney a "racist" if he evens used the words "Baltimore", "Harlem" or "Newark".

Okay, folks, as of this hour implement "Operation Barack O'Santa"!  Let's get going!

I am so disgusted with our press. Pat Caddel has it right. They are guilty of crimes against our country by helping that piece of s**t in the Oval Office protect himself and his campaign. In my life I have never seen a country so taken in by a man who has so obviously been caught in the act of murder and flat walks on it. I hope we can keep up the fight long enough to at last prosecute him for the crimes he is guilty of. My nephew is a Marine. I don't want him going to war under this man's command. I will try to convince him to run to Canada. This is just so wierd, what happened to this country. Mass stupidity!!

Win or lose, Ken, Obama is going to skate. Other than CNN and Fox, no other media outlet wants Benghazi covered. The liberal media's slobbering love affair with Obama knows no bounds.