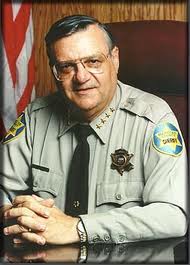 There isn't anyone in Arizona who doesn't know that the Arizona Republic newspaper, owned by the ultra liberal Gannett Corporation, openly advocates for Open Borders and Blanket Amnesty for illegal aliens.  Gannett plants these Open Borders advocates on their editorial boards on newspapers they own throughout the nation.  So, it is not surprising that Sheriff Joe Arpao has been a bee in their bonnet.  They absolutely hate the guy and have trotted out the silliest of news articles that might somehow stop Maricopa County voters from re-electing him with 80% of voter support, as they have done for over 20 years.

The Arizona Republic runs hundreds of illegal sob stories every year.  They refuse to call them illegal aliens, preferring the more benign "undocumented immigrant."  Rarely a day goes by that The Republic doesn't print a story about an illegal family with six kids being forced back to Mexico, or an illegal who has come here for taxpayer funded medical care and forced to return to Mexico where state funded medical care is available.  Or some poor illegal who stole someone's Social Security number to get a construction job...or even a "poor" illegal car thief who stole it to put tamales on the table.

This liberal Gannett rag will stop at nothing.  They actively censor Hispanic crime news, purposely leaving out the identity of a Mexican who has committed some heinous and violent crime, lest the reader become indignant by the sky high Hispanic crime rate.  They hire columnists who worship the illegal alien and write daily of the travails of living here illegally.  The Republic has been on this Open Borders quest for a decade.

So, when Sheriff Joe busts a business for hiring illegals the Republic trots out their Hispanic reporters to highlight the tragedy of an illegal, using stolen American ID, losing a job.  They demonize Joe by saying he only arrests gardeners and factory workers.  This, despite the fact that Sheriff Joe has frequently arrested van loads of illegals, with bundles of drugs on their back.

Now, here's the irony of irony:  Not long ago it became known that Sheriff Joe's Department really screwed up in not fully investigating a number of sex crimes....and the Arizona Republic has tied their wagon to this issue and are really attempting to nail him good.  In an effort to defeat Sheriff Joe in November's election, the Republic hammers on this one issue day after day.  In fact, this past Sunday, The Republic dedicated their entire front section to air the details of the Sheriff's Department's failings in executing these investigations in a timely manner.  Full page layouts, page after page of the entire front section!  The news of the rest of the world didn't exist according to The Arizona Republic last Sunday!  BUT, because all of Arizona are aware of The Republic's biases against Sheriff Joe The Arizona Republic's efforts are largely being ignored by a large majority of Arizonans; they are simply passing it off as just another Gannett "hatchet job"effort to destroy Sheriff Joe.

Never has there been a better example of crying "wolf" too loud and too long.  After a decade of biased reporting and intentional censorship, The Arizona Republic has lost their "street cred"  and are no longer relevant.  Tens of thousands of Arizonans have cancelled their newspaper subscriptions because they know they won't get the straight news!  When this liberal rag finally had an issue that was relevant and meaningful they were unable to close the deal on smearing America's most popular Sheriff.  I find that satisfying; if a newspaper opts to hide behind the press protections embodied in the Constitution, and uses that protection to advance their own personal biases, in lieu of objective reporting, they deserve no better than to be ignored.

Sheriff Joe will win still another election come November.  He'll win with huge majority margins, just as he has for over 20 years, as Arizonans ignore a newspaper that sold it's objective soul long ago.

Crying "wolf" too long and too often is never a winning strategy.

Note For October 2nd:  We lost another border patrolman this morning.  One killed and one injured and medivaced to the hospital.  Two weapons were found after the assault; both came from Obama's Fast and Furious campaign.  Yet, the Justice Department continues to spend their time suing Sheriff Joe for enforcing our immigration laws.
Posted by A Modest Scribler at 2:00 AM

Here in Maricopa County Arizona we have the toughfest Sherrif in America, Joe Arpao. This man has worked very hard to rid this county of all the illegal border hopping imigrants from Mexico. But there is one thing that so many people don't think about and that is that not only is he making Maricopa county a better and safer place to live but he is helping America as well. I have personally met Sherrif Joe and yes I Think he is doing one hell of a good job for us all!! I am %100 American born to american parents, raised in america,and proud of it!!! I have just one thing to say to all Az Republic reporters regarding the illegal undoccumented imigrants in Az., And in America.As I remember the United States Constitution states that all men have shall have equal rights and freedom. THE CONSTITUTION WRITTEN IN THE USA for and about US citizens born and raised in this country but it doesn't say anything about people from other parts of the world that come here to the U.S. having the same rights as we do. Just because they come here does not entitle them to any kind of rights in this country, not freedom,not work, not housing, and especially not the right to come here and expect and demand the same rights as we have. It's a shame that the country you come from is such a bad place but it really is not our problem nor is it our responsibility to take you into our country and give you the right to anything at all. It seems so funny to me that nearly each and every illegal alien that sneaks into our country has nothing but bad things to say about it anyway, kinda strange to me that they would act the way they do once they get over here. DEPORT THE ILLEGALS NOW BEFORE IT IS TO LATE!! HAIL TO SHERRIF JOE ARPAO,HE SHOULD BE THE PRESIDENT, OUR COUNTRY WOULD BE A MUCH SAFER AND BETTER PLACE TO LIVE THAN WHAT IT HAS BECOME TODAY! I SERVED MY COUNTRY AND HELPED US EARN OUR FREEDOM AND I AM DAMN PROUD I DID> GOD BLESS AMERICA.

Thanks for visiting Mark, and thanks for taking the time to comment.