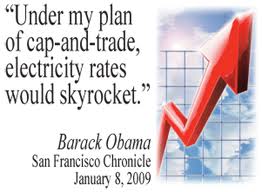 As Americans continue to try and deal with gas prices approaching $5.00 a gallon Obama remains stoic and unmoved.  Why?  Because Obama wants gas prices to go even higher.  Just as his Secretary of Energy said "it is not my concern if gas prices go to $7 dollars per gallon", Obama is unconcerned how much gas prices are cutting into the family budget.

Obama, being the supreme egotist he is, believes he is smarter than everyone else, but especially you, the taxpayer.  He believes the only way he can get you to buy those little green cars is to punish you....and if that means $10 dollar per gallon for gas, so be it.

So look for the costs to fill your tank to go higher in Obama's next term.  But even more damaging to your pocketbook will be a tripling of your gas and electric bills.  Yes, it was indeed Obama who said in January, 2009, that under his Cap and Trade bill, you can expect electricity rates to skyrocket.  Why?  Because, at the moment Obama's solar company campaign contributors are seeing their companies going bankrupt.  The only way Obama can make green energy competitive is to punish those who are producing oil and coal.  Rather than let the open market determine the solar and wind winners and losers, Obama insists he knows better than those who invented the business!

Please remember that even the Democrats refused to pass Obama's Cap and Trade bill back in 2009.  Under Cap and Trade every American company would pay a huge tax on energy usage and drive up the costs of everything from a gallon of milk to an automobile as those costs are passed on to you, the consumer.  Even more crippling will be Obama's increased taxes and strangling regulation of the coal industry.  He has openly said that no new coal plant will ever open under his watch because if they try it, they will go bankrupt trying to fight oppressive government fees and regulations.  This despite that fact that America still relies on coal for 70% of the energy needs!

Obama has pledged that, if re-elected, he will resurrect the Cap and Trade bill and if Congress balks, he will simply bypass Congress and initiate action through his energy "czar".  So, if you still choose to vote for Obama please be prepared to pay triple what you're now paying for your electricity.

HEY!  Anyone concerned about that 8% unemployment rate?  Well, get ready for a 20 percent unemployment rate as Obama legalizes an additional 28 million illegal aliens.  He's already promised to do it!  As he has already shown a willingness to do, if Congress won't go along with legalizing those millions of invaders, Obama will simply issue an edict and grant them amnesty from his throne in the Oval office!

Obama has also promised to change the face of our Supreme Court as well.  He has high hopes of being able to appoint at least three liberal judges to add to the four already on board with Team Obama.  Once he has achieved that goal the anointed one will have achieved his dream of turning America into the Socialist States of America.

Does Obama's 2nd term agenda jive with yours?  If so, by all means get out to the voting booth and vote for him.  Just remember when you do, understand fully what you're voting for!
Posted by A Modest Scribler at 2:00 AM

You are correct when you state Obama is ready, willing, and able to bypass Congress to enact his agenda. The problem is the "able" part is well within Congress' ability to control. NONE of the government operates without money, and the Constitution designates the House as the organization with the power of the purse. If only we had leadership ready to tell Obama that if he bypasses Congress, the House will immediately defund operations of any group Obama is using to accomplish his means. Like you, I won't hold my breath but it is available if we had a leadership with the stones to use it.

You're correct, Randy, but this particular Congress has been impotent; the only initiatives being driven by the House, only to see it die in the Senate where Harry Reid controls that chamber and just refuses to even bring a bill to a vote.

As to Obama's initiatives, it's not only his actions to circumvent Congress, it's also his effort to "divide and conquer" by pandering to a particular interest groups to achieve his means. Look how he illegally "passed" a version of the Dream Act, thus pandering to illegals and labeling anyone who opposes his actions as "racist". This guy, Obama is the devil himself, having learned the art of fighting dirty in the streets of Chicago.

My comment above was meant as a joke. I sincerely apologize to anyone who might have taken offense to it. Under no circumstances do I or would I condone any harm to come to the president of the United States. Thank you. Frank

I'm sure you didn't mean it in that way either, Frank. Hope you're doing well.