Why Capital Gains Taxes Remain at 15% 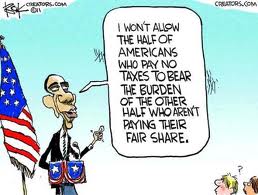 One may argue about whether President Obama is trying to start class warfare with his condemnation of the current Capital Gains tax rates.  Republicans charge him with class warfare while Obama says the rates need to be raised to 30 percent for "billionaires and millionaires".  When one hears Obama's cry for economic justice it certainly sounds reasonable doesn't it.

However, if one looks at what Obama has actually been willing to put on paper, one finds that he is for raising the capital gains tax for anyone who makes over $200,000 dollars.  Here's the problem with that proposal.  Many married professional couples make $200,000 dollars per year, but that doesn't make them millionaires!  Many of Obama's "millionaires" are paying $12,000 a year for health care, hold a $300,000 dollars mortgage and have debts that keep them constantly on the treadmill of earnings just to churn out enough to support a middle class household.  And while $200,000 per year might be considered a healthy income in Iowa, ask those folks in Chicago or Detroit or New York how they're managing with a 60% federal, state and city tax rate!

Even those facts are beside the point with regard to capital gains taxes.  The basic question one must ask is "should capital gains be taxed at a lower rate than ordinary income?"

Can we find no better example than Obama's Buffett rule?  The President loves to cry out the inequality of billionaire Warren Buffett's secretary paying a higher rate on her earned income than he does on his capital gains.

Has anyone stopped to think that Warren earns income solely from capital gains?  And what are capital gains?  That is when Warren puts his own money at risk in order to earn a return on that money.  While Warren places his money at risk, his secretary does not.  Her salary comes to her each month and is guaranteed.  She puts nothing at risk and is taxed accordingly.

Now we know old Warren makes out like a bandit.  He earns tens of millions.  He also pays millions in taxes while his secretary pays a thousand or two.  So who's paying more?  The IRS figures clearly show that folks like Warren represent only 1 percent of the American populace.  However, they pay 50% of all taxes!

The most absurd aspect of capital gain taxation is that, in almost all cases, any money available to invest has already been taxed at a rate of whatever tax rate the taxpayer was in when earning that money.  So really, Big Government is taxing you twice on the same money!  And they want more?

Okay, I still don't feel sorry for Warren Buffett or Bill Gates or any other billionaire who pays big taxes.
But, let's go back to Obama's actual proposal:  He wants to double the tax on capital gains for anyone making over $200,000 per year!  Under Obama's proposal he wants to tax folks who start a small business and put their money at risk.  Do you know what happens when you put the squeeze on people who are risking their money?  They'll stop risking it!  And when they stop risking it we'll see the economy tank even worse than it has to date.  Job creation dries up, businesses fold, and the government, rather than realizing more tax revenue actually experience a net loss as they must pay out unemployment insurance for all those laid off small business workers!  Think that's not significant?  The U.S. Chamber of Commerce figures show small business employs 70% of all American workers!

So folks, next time you hear Obama playing the class warfare card, put your mind to work and figure out what he is really proposing!  Obama has never held a job, does not understand how the economy functions, thus his actions have deepened and extended this recession.  Consequently, Obama is now forced to play the class warfare card in order to get re-elected!  He dare not run on his miserable record.

Finally, folks, let's look at what the non-partisan Office of Management and Budget said about the federal budget.  The OMB says if we taxed all the billionaires at 100 percent of their earnings, if we literally confiscated everything they make, it would pay only 8% of the annual federal budget, roughly 53 days of government spending!

You check it out and You Decide if you want Obama running this economy for another four years!

Posted by A Modest Scribler at 1:30 AM