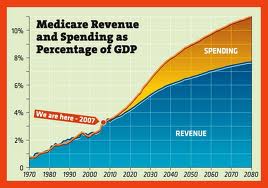 If any of you wish to learn the truth about Paul Ryan's budget proposal for Medicare and Medicaid, if you're not totally buying the liberal ad about conservatives pushing grandma off the cliff, here are a few facts which you may google for yourself to confirm.

Medical costs have been increasing at 8 to 10 percent per year for decades.  As a percentage of total federal spending it has risen dramatically as the tens of millions of aging Baby Boomers begin to need more medical care.  The same is true for Medicaid as millions are added to the rolls, either because of job losses or the millions of Hispanic anchor babies adding to the nation's medical burden.

For decades Medicare was a sustainable, self funding program.  However, as politicians robbed the funding, placing medicare money into the general fund (see Obama's confiscation of $500 billion dollars from Medicare to pay for Medicaid anchor babies), the non-partisan Congressional Budget Office projects Medicare will be broke by 2016.

Congressman Paul Ryan has been trying for three years now to introduce legislation that would bring the costs of Medicare and Medicaid back into balance.  He initially proposed a medical voucher program that would credit seniors with the funds to buy their own personal health insurance.  This would have put medical price decisions into the hands of seniors and would have lowered the rate of increase in medical costs with the patients themselves auditing the bills.  Ryan would also stop paying Medicare to millionaires who can afford to buy their own health care premiums, something you would think liberals would love...but don't!

After recognizing that his plan would never succeed with liberals, (liberals always believe that a big government managed program is preferable to letting individuals decide) so Ryan paired with Democrat Ron Wyden from Oregon to co-sponsor a bi-partisan solution to the Medicare cost crisis.  Under the Ryan-Wyden plan seniors who like their Medicare can elect to stay on the program.  Those who wish to have the freedom to make their own health care decisions can opt to receive a government voucher and buy a commercial health care policy.

Neither Harry Reid or Pelosi nor Obama will support this bi-partisan plan.  Instead the liberals have opted to demonize the conservatives and show that infamous ad of grandma going over the cliff.  Never mind that the liberals will be pushing grandma over the cliff in 2016 when the bills come due and there's no money to pay them.  Scare the seniors, scare women on the phony women's birth control issue and win!  The truth and facts do not matter.  The only thing that matters is a continuation of the socialization of America.

I have got to say as a middle aged female headed for the golden years at a much faster rate than I ever could have imagined I am distressed over the possibility that by the time I get there, my only option for affordable health care may be to just die!!

Good morning dear. I feel your pain. I just learned that Obama's budget actually takes $716 billion from Medicare, not $500 billion.

And i hope you're not one of those "dizzy broads" that think conservatives are threatening women's choice on what to do with their body. We just don't think it is fair to fund 'birth control through abortion' and paying for everyone's birth control pills. Where in hell does it say in the Constitution that we have to pay for birth control!

First of all Obama didn't take money fron medicare.They found at least this much in overpayments to insurance who charge too much for there services,insurance likes to charge as much as possible.He actually is saving this money and putting it back into medicare.The right is still trying to get the inaurance co's money.Why are they so into taken care of the fat cat insurance co's.How about Seniors. As far as birth control they want to control the womans body. THEY want government out of our lives but want to be in your bedrooms. What does funding birth control through abortion mean???? You're against birth control and you don't want to help parentless kids,WHAT THE HELL DO YOU WANT? They do sort of go together.It would be nice to have a perfect word the republicans think there living in.

I agree,Insurance Co. make plenty when they don't they cancel you.Why does the right keep helping insurance co's they do fine by themselfs.The Democrates have cared about people,the Republicans care about Insurance Co's.

Anon, not only are your facts wrong, you seem to be drunk on the Obama Kool Aid. No one wants to control your sex life or your birth control; we just want you to pay for the damn thing, not us!

the rest of it I won't even bother to comment on; far too ridiculous.