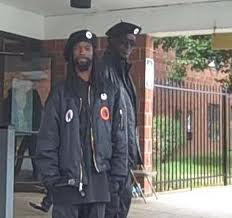 Well, we learned today that Black Supremacist Attorney General Eric Holder is sending an army of Department of Justice "voting monitors" to Arizona to monitor our Tuesday primary elections.  Never mind that he never prosecuted the Black thugs that drove off white voters in the last election; he's going to make sure Arizona election officials give illegal Mexicans the chance to vote for their "Open Border/Amnesty candidates.

It is ironic that Holder is sending none of these thugs to Chicago where Democrats routinely go out to suburban cemeteries and register dead people to the voter polls.  No, Mr. Holder is focused this election season on Alabama and Arizona, two states who have passed strict illegal immigration laws.

Obama and Holder consider our Arizona voter id laws restrictive.  We demand such things as a Driver's License, a free state ID, a military ID card or two pieces of non photo ID such as a property tax bill, a utility bill or any other document that says you live in Arizona...pretty tough, huh?

Seeming as how Obama has told U.S. Immigration that they must accept an illegal  Mexican's word that he is a "Dreamer", regardless of age or lack of documentation, I expect if Obama is elected we'll not need any form of proof of voter eligibility the next time around.

Eric Holder is a Black Supremist even though he is half white? Doesn't really make sense does it? In 2006 there were 850 monitors sent around the country By Alberto Gonzalez under Bush. What's your point? Once again you're making hay out of horseshit. The monitors are there to confirm the Voting Rights Act of 1965 are not violated.

Your ignorance is overwhelming; go to any source; Wikipedias, the U.S. Government biography..and dozens more. Eric Holder is not half white; he was born to African American parents from Barbados.

Holder himself brags about being the first African American Attorney General and is indeed a racist; read his litany of quotes against the White race over the lat four years.

Now, after this, any future comments from you will be deleted. This is not an open forum for idiots who continue to rant and never substantiate.

Again, the DOJ has a hard-on for states trying to enforce Voter ID laws, not preventing anyone elgible to vote from doing so.