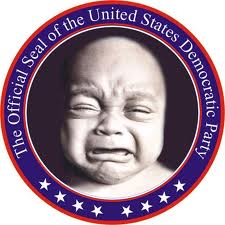 We've all seen that Democrats will curry favor with any interest group, perverted or otherwise, if there's a ghost of a chance to win a few votes.  The Dems biggest voting blocks, and source of campaign revenue are the Trial Lawyers Association and a corrupt and inefficient National Teacher's Association.

Now the Dems have teamed up for a big group cry over voter ID laws.  They say that requiring voters to show ID is a violation of national voting laws.  They go on to demonize these laws as a tool used by Republicans to disenfranchise poor voters.

I find this complaint the most frivolous yet from a group that thrives on listening to cry babies.  To wit:

Arizona has been sued endlessly by Obama and Attorney General Eric Holder over Arizona's "strict" compliance with voter ID laws.  I live in Arizona and have my voter packet sitting in front of me right now.  Here's how "tough" it is to prove you're a resident in the state of Arizona:

*  Now if any of the above are too "tough" for you, all a voter need do is produce two of these non photo documents:

Wow!  Isn't that tough?  And yet the liberals scream and moan if a state makes any effort at all to insure you're a legal resident!  Never mind that the same people that scream about having to show ID to vote have no qualms about showing their ID to buy liquor, cigarettes, apply for welfare or food stamps, or board an airplane.  Asking these people to do even the smallest thing to prevent voter fraud is just too much to ask!

Could it be the liberals are bemoaning the fact that they might miss getting votes from illegal aliens?
Or are they regretting that they might lose a few of the "cry baby" votes?   Hmmm.
Posted by A Modest Scribler at 3:00 AM

All ridiculous reasoning for the attempts to block voter ID is only too painfully obvious. It is disgusting in its obviousness. These people need to be crushed and removed with the rest of the seditious trash taking apart this wonderful country. Thanks for yelling about it.

Ken, you're right. The liberal motive is so ridiculous as to be transparent. I haven't researched all the states being sued on this voter ID matter but I know they have filed suit against Texas, North Carolina, Arizona and Florida.

While we average citizens tire of the unending whining by those who have grabbed a government tit and hung on for dear life, the libs thrive on it.