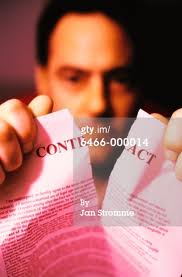 Civilization finally came to the human family when the honoring of contract law was finally codified.  The English Magna Carta was the first revered document that finally advanced both capitalism and the rule of law.  After Contract Law was mutually agreed upon by the British Monarchy and the British commoner, guaranteeing the sanctity of personal property, Britain became the supreme world power.

When our founding fathers laid out the principles for governing the newly independent United States, the concept of honoring Contract Law was deemed essential, and failing to do so would cause chaos.  By honoring all manner of contract the U.S. built the most successful capitalist society in the history of the world.

Then, in the first decade of the 21st Century America elected a socialist who reviles the very concept of contract law, and who has done everything to destroy Contract Law during every day of his Presidency.

Before I get into the citation of instances of Obama's aggressive efforts to destroy Contract Law, let me present a scenario for you to ponder:

Let's assume you bought a home in 1982.  You paid $45,000 dollars for your modest 4 bedroom, two bath home on the traditional quarter acre.  You now decide you want to "down size" by selling your home and buying a smaller one.  You hire a realtor, get an assessment, and find your house is now worth $300,000 dollars.   This is great news!  Your mortgage has been paid down to a $2,000 dollar balance.

So you put your home up for sale, but are flabbergasted when your mortgage holder, Wells Fargo, steps up and says they'll be taking half of those home sale profits.  They want to share half of your $255,000 windfall!

Folks, that's a violation of contract law.  This damned bank is trying to horn in on profits from a smart investment decision that you made!

And yet, Obama for three years has been demonizing banks that hold your mortgage and demand that the $300,000 dollars you owe on your mortgage should be reduced by the banks because you made a bad investment decision!  Or because you took out a second mortgage to finance a new furniture purchase or a trip to Europe!

How is that any different than a bank who wants to confiscate half of your profits when things are going well?

But Obama's assault has not been confined to home mortgages.  He violated contract law when he interfered in the GM bankruptcy, in confiscating commercial student loans and in dozens of other conforming business contracts.

Now Socialist California, as they usually do, has taken the assault on contract law to new heights; not fewer than a dozen counties in California are proposing seizing home properties under Eminent Domain laws (restricted by law to state projects like highways, etc) and confiscate these mortgages from the banks, by paying currently depressed market prices, then giving them back to the homeowner at below market rates, regardless of that homeowner's credit rating!  And yes, any costs will be at the taxpayer expense!

Why would Obama and the California Socialists put the sanctity of Contract Law in such jeopardy?   Well, they're pandering for votes, of course!

What will we become if anyone who makes a financial decision has no guarantee that a contract will be honored?  Can anyone not understand that this actually extends the housing recession as banks are reluctant to sign a contract, not knowing if it will come under attack by ruthless politicians? Can you even imagine how quickly commerce will collapse if this trend continues?  Well, I guess if you re-elect Barack Obama you'll soon find out!

Your irrational confusion of California with all things you disapprove of only conveys a lack of acquaintance with the whole state.

One might as well castigate Hawaii - as the origin of Barack Obama - as California, for bearing some ghostly similarity.

When one discusses living beyond one's means, BTW, I cannot help but draw parallels between California's fiscal problems and Arizona's water problems - exacerbated by the need for every home owner to have a swimming pool, as a status symbol. The Colorado River is drying up. How sustainable is that?

If the United States and California have anything in common it is that both entities are too large for the citizens to oversee the government, and both need to be split into smaller, more effective, more accountable entities.

Until we address AND solve that problem we will continue to be struggling to understand and grasp control of issues that require full time attention to administer effectively.

As things stand now those appointed to act as watchdogs and to administer these issues for the body politic are counting upon the sheer complexity of the issues, AND the fact that it is a full time job keeping up with what they do, to render us ineffective and keep us at one another's throats.

Or so it seems to this Tucson native, living close to the Oregon border, and looking forward to quail hunting season.

Dear Mr. Childers,
I welcome responding to your statements. First of all, California is one of fifty states but takes over one third of every federal welfare dollar. That is because your liberally controlled legislature caters to government "tit-suckers" for their votes. Your greedy state government unions are bankrupting the state, just greedy municipal workers have bankrupted a number of California cities.
As to the water issue, perhaps you're not aware that Arizona granted a portion of their water from a decades old water agreement, just to save California from themselves.
i do not have a swimming pool and while there are many in Arizona, they represent a fraction of those pools in California.
Finally, while I appreciate your comments, they had absolutely nothing to do with my advocacy that we must maintain the integrity of contract law.
I cited Obama as the leader of those who would throw contract law to the wolves, and California politicians are bring the art of violating contract law to new heights.
Thanks for your comments and have a joyful quail hunting season.

Does your analysis change at all if the lender back issued credit irresponsibly or even fraudulently?

Does your analysis change at all if the lender bank can reduce its foreclosure losses by renegotiating with borrowers?

Anon, thanks for your comments. And by all means, if contract law was violated on either side of the agreeing parties it should be subject to judicial (but not political) review.

And by all means, yes, let's let two parties negotiate, or re-negotiate for terms agreeable to both.

Again, thanks for your comments; they are quite pertinent and thoughtful.

First of all you shouldn't be talking about MSNBC distorting truths when you post flat out lies. If you really are a retired military officer then I'm ashamed for you. What the hell happened to your integrity sir? Obama hasn't confiscated any student loans! He saved the Auto industry which I worked in after Viet Nam. It appears the only one lost in America is YOU! Stop spreading lies! Or is that how you raised your children? Have the guts to post this and reply also.

Sorry, but your post is simply another of those empty headed emotional tantrums that offer no basis in fact. All of the charges I note about Obama are easily sourced on the internet, but you, being the typical liberal choose to swallow the Obama Kool Aid and rant. You offer nothing to dispute my claims.

And your reference to Obama saving the auto industry, I refer you again to the rules of business reorganization under the bankruptcy laws..without screwing the bond holders and giving half the company away to unions. And finally, I'm damn tired of Obama taking credit for using our tax money and claiming he saved the auto industry.

As I've documented many times GM still owes us $37 billion dollars and the Treasury Secretary said last week that the U.S. government will have to write $25 billion of that off as a loss..meaning we'll never get our taxpayer money back.

While liberals and "occupiers" like you attacked the banks, every one of them paid back their loans with hundreds of millions in interest while Government Motors will never do so.

Unless your next post, if any, outlines solid and specific evidence to dispute my article you;ll be deleted in a New York minute.