"John Doe versus The Anointed One" 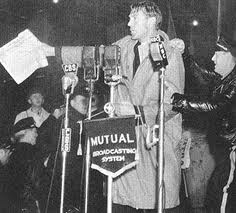 Does anyone remember the great Frank Capra film "Meet John Doe?"  Gary Cooper plays "John Doe", a humble, soft spoken guy who gets caught up as a candidate in a political campaign.  Starting off as a joke by a group of tired old greasy politicians, the John Doe campaign begins to catch on with the American people.  John Doe's simple message of "Be A Better Neighbor" begins to ring true for voters who've heard all the golden dulcet tones of smooth talking orators and grown tired of them.

John Doe's greatest fault was that he couldn't pretend to be someone who he wasn't.  He simply could not go out and boast how great he was, or brag about being anyone's "savior".

We see some of the same contrasts between the two Presidential candidates today.  While Barack Obama will resurrect his dead cancer-ridden mother at a moment's notice if it'll score a few votes, Romney speaks little about dealing with his wife's breast cancer and dealing day to day with her Multiple Sclerosis.

While Barack Obama wrote two "stream of consciousness" books about his search for his inner self, his  "contemplate my naval" quest for his purpose in life, Mitt Romney was completing a two year missionary sabbatical in France, doing community charity work,  and trying to rally a team of missionaries who mourned the death of a team member.

While Barack Obama's Chicago "hit squad" was destroying the reputation of his political opponent, Mitt Romney was up in Utah saving a bankrupt U.S. Olympic Organization...and turning it from a fiasco into an event that generated a hundred million dollars in profits for American amateur sports!

While Barack Obama often emits crocodile tears over he and Michelle's student loan debt (never mentioning the hundreds of thousands of dollars in free minority scholarships they received), Mitt Romney rarely mentions the fact that, upon inheriting millions of dollars from his father, he donated the entire inheritance to charity, saying "I want to make it through life on my own efforts".

Mitt Romney and his wife Anne lived in a basement apartment when they first married and lived frugally, but you don't hear about that in the media because it is far easier to swallow Obama's labelling of Mitt as a "rich guy".

Like Gary Cooper in "Meet John Doe", Mitt Romney is not a great orator.  He is far more comfortable "doing" than talking about what he "will do" as Obama loves to do.

No, if you're looking for Mitt Romney to go make a speech at the Brandenburg Gate and flirt with Europeans so they give him a Nobel Peace Prize two months after his election, he'll disappoint you.  If you're looking for Mitt Romney to travel to Egypt and tell that country's parliament that "Americans aren't any more special that anyone else", you'll also be disappointed.  Romney didn't study the history of Socialism so he still remembers that America saved Europe twice and fed and medicated the world for a century so he believes deeply that Americans, and America is "exceptional".  He learned that those thousands of white crosses in cemeteries across Europe honor Americans who were truly "exceptional".

I read that many voters are bored with Mitt Romney.  They say he has no "fire".  He's not sexy, he's not exciting.  His speeches send no chills down the collective American spine.

Well, frankly, I'm tired of hearing the golden tones of an orator who ceded leadership to Pelosi and Reid and has been on a four year term of "campaigning" and making great speeches.  I'm ready for a guy who spent all night putting up store shelves in Staples to get that business running.  I'm ready for someone who knows how to achieve success thorough action...and not words.

Our greatest Presidents were poor orators.  George Washington spoke in short simple sentences.  Thomas Jefferson hardly spoke at all, after his first year in office, he sent his State of The Union addresses "in writing" to Congress.  Our greatest President, Abraham Lincoln, gave the greatest speech in our nation's history in a couple of hundred words at Gettysburg.  Dwight Eisenhower presided over one of our nation's most prosperous eras.  He built the entire National Highway System but spoke softly and simply.


At the end of "Meet John Doe" the people finally see through the ruse and foolery of power-hungry, mud-slinging politicians and rally to John Doe's simple words; words like honor and truth and integrity.  As John Doe is cheered by the rallying crowd, one of his cohorts says to another "Listen to that!  That's the American people...You can't lick em!"

I'm hoping that we Americans can still see through the ruses and demagoguery and the mud-slinging and do their own "speaking" come November.   Mitt Romney doesn't need to speak for us...he just needs to listen to us.  The American people are aching for someone that will finally listen.


*** If you enjoyed this article please hit the "share" button.  Thanks.
Posted by A Modest Scribler at 3:00 AM

I like your post. I did a comparison, though much shorter, between Romney and the Kennedy clan.

Thanks for reading and taking the time to comment, Lady Di; yes I can see some stark contrasts between the Romneys and Kennedys as well!

anon, I don't expect you to look up the correct grammar, but it is written correctly. Now, is that the extent of your criticism? Very weak.

Anon; here's a grammar lesson for you.
From "Grammar Girl":
If you're trying to write about possession and you have two subjects, you have to decide if the two people possess something together or separately. Here's an example: Steve and Amy's religious beliefs.

On the other hand, if Steve and Amy have different beliefs, then you would say Steve's and Amy's beliefs.

I would also add, regarding Jefferson, that delivering the state-of-the-Union address in writing was the common practice until Woodrow Wilson's administration.

All that being said, I did enjoy this post (this is my first visit; I came here from the WSJ comment section), and you've made some very good observations.

With regard to the grammar, I've checked "grammar girl twice on this and she list he and his as both acceptable when used in compound possessive pronouns. Perhaps it doesn't sound right, but, according to two sources I checked, it is proper grammar. I'm going to check it further.

Finally, thanks for reading ,and taking the time to comment.

Thanks for your kind response.

I agree with the compound-possessive rule you've stated as applied to anything other than pronouns. (I just re-checked my various grammar and usage books, and yes, the rule is well supported as regards common and proper nouns.)

But I've never heard the rule applied to pronouns. In looking just now, I couldn't find anything one way or the other on the pronoun sub-issue. To me, for whatever it's worth, "he and his wife's house" sounds strange, though I can see the logic of it. "The bank sent the statement to me and my wife's accountant"? But needless to say, I might be the odd one.