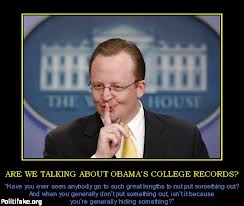 By the way, I did look at the two years of Romney tax records and saw nothing that concerned me.  I wish I made that much money but don't begrudge anyone else's success.  And, if someone elects to voluntarily share their wealth, I find that admirable.  For example, I see from Romney's tax records that he donated ten percent of his earnings to charity.  That's wonderful!  Thanks to Romney's success, thousands of those less fortunate are enjoying a better life due to his charitable gifts.  Romney also paid $3.1 million dollars in taxes last year (he's one of the top ten percent that pays 70% of all tax revenues!).
That too is wonderful.  By supporting our government Romney's success helped to feed and house and medicate the poor, build roads and inspect our food sources.

Frankly, what I would really like to see are Obama's college records.  I cannot; Obama spent over $2 million dollars in legal fees to make sure those records remain sealed.  I find that puzzling.  At every job I ever worked I had to submit my education records for review before I was hired.  In fact, the United States government demanded to see my college records before selecting me for U.S. Air Force Officer's  Training School.  They were not only looking at my grades; they wanted to see if there were remarks on my records that might have reflected on my character, my leadership qualities, and my capabilities to serve my country in compliance with the service's high standards.

Four years ago the American people hired Barack Obama, to be our Chief Executive, as well as our Commander in Chief.  I find it amazing that Mr. Obama goes to such great lengths to insure his college records will never see the light of day.

So, as Mr. Obama castigates Mr. Romney to show more of his "tax-complying", IRS approved tax records, he continues to refuse to open for public view his twelve years of college records.  I am much more concerned about what is being hidden there!  Mr. Romney's tax records have been submitted for both public and IRS review.  So who's hiding what?
Posted by A Modest Scribler at 3:00 AM

Twelve years of college records? I would rather see the records of the puppeteers behind either parties choice.

The writing below (link to article follows) came from an article I read awhile back that certainly got me thinking a bit on this very subject. I don't understand why any conservative needs to release any personal records. Democrats just say no and no more is said on the subject. Once again a one way street, its wrong and needs to stop now. We need to know who we vote for to avoid any more disasters like the last four years. Somehow it seems the media should be held legally accountable for all the coverups as well

"Obama got a leg up by being admitted to both Occidental and Columbia as a foreign exchange student. He was raised as a young boy in Indonesia. But did his mother ever change him back to a U.S. citizen? When he returned to live with his grandparents in Hawaii or as he neared college-age preparing to apply to schools, did he ever change his citizenship back? I’m betting not."

If you could unseal Obama’s Columbia University records I believe you’d find that:

A) He rarely ever attended class.

B) His grades were not those typical of what we understand it takes to get into Harvard Law School.

C) He attended Columbia as a foreign exchange student.

D) He paid little for either undergraduate college or Harvard Law School because of foreign aid and scholarships given to a poor foreign students like this kid Barry Soetoro from Indonesia.

If you think I’m “fishing” then prove me wrong. Open up your records Mr. President. What are you afraid of?

If it’s okay for U.S. Senate Majority Leader Harry Reid to go on a fishing expedition about Romney’s taxes (even though he knows absolutely nothing about them nor will release his own), then I think I can do the same thing. But as Obama’s Columbia Class of ’83 classmate, at least I have more standing to make educated guesses.

It’s time for Mitt to go on the attack and call Obama’s bluff.

Ken, I agree with everything you suggest, but the main stream media are never going to approach Obama and even ask why he won't release his 12 years of college records, much less "demand" it.

Only Fox has raised the question, and even them, not every often.

And, re the Reid idiocy, even Romney has not called for Obama to release his records. Were it I, I would be responding with that demand every time one of Obama's thugs asked for more tax returns.

DITTO Ken,
I feel the exact same fellings as you. You are dead now.
He is hiding everything we need to know about him, why else would he spend tons of money to keep it from all of us reasonable, smart, common sense people! Can't wait to see the movie 2016!
Common Sense!!

I read that there was a campaign on 'the point' which was raising funds on the proviso that Obama released his college records. The funds raised would then be donated to charity. What a good idea. Surely, once the amount started to climb, there would be public pressure for Obama to release these records. The problem is that the website is no longer being maintained and I could not activate my account to make a donation. If anyone knows of a similar campaign I would be happy to contribute.

That's a great idea, anon! Wish the fund was still active cause I would really like to see what Obama's been hiding. I'd donate to a fund like that!