Eat Chicken And Speak Up For Freedom 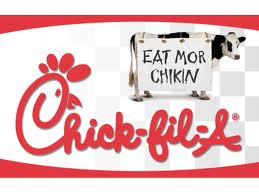 I probably eat fast food once a month.  But today I'm joining millions of other Americans and going to Chick-fil-A to have chicken sandwich.  I have always held contempt for the radicalism of the Liberal Left, whether it was spitting in the face of Vietnam vets or demanding that religious folks accept what they deem immoral, or forcing churches to fund abortions and birth control.

The latest of the Liberal Left's savagery has been in reaction to comments made by Chick-Fil-A's CEO that he was opposed to gay marriage.  Out came all the leftist political toadies who can only survive in power by amalgamating all of the various socialists, the whining ever present "victim class" and alternative life style groups to form a lynch mob.

So, we have such socialist dictators like the corrupt mayor of Washington D.C, the pandering mayor of Boston and, worst of all, Obama's former Chief of Staff, and now Mayor of Chicago, Rahm Emmanuel, he and his "dead fish" enemies list.  They have all pledged to use the obtrusive power of government to keep Chick Fil A from opening a business in their city.

Emmanuel pronounced that Chick Fil A does not match the values of Chicago.  I find that the height of arrogance to presume that Emmanuel represents 100% of Chicagoans.  No, what Emmanuel is really saying is that Chick Fil A does not meet the values of gays and socialists.  And, sadly, it says something far worse.  If you are part of mainstream America, and if you are opposed to the liberal agenda, then you will be punished, and punished severely.

Even the ultra liberal American Civil Liberties Union has said this kind of liberal nazism is unconstitutional and totally unacceptable in a freedom loving America.

Several months ago I wrote about an American society turned upside down.  We are currently living in a society where the minority rules the majority with an iron fist, whether it be forcibly injecting the gay lifestyle in the military (and allowing them to march in gay Pride parades in uniform, but not in a political parade!), forcing churches to pay for birth control and abortions, or forcing tax-paying Americans to foot the health care bills for 30 million Americans who won't work for a paycheck, but prefer instead, a welfare check and food stamps.

Now gays are saturating Craig's List in announcing a campaign to show up at Chick-Fil-A tomorrow, put on a same sex kiss marathon in front of the stores, enter Chick Fil A restaurants to demand free water while not buying anything, and harassing "straights" who show up to support free speech.

So, I'm going up to my local Chick Fil A and order a sandwich.  I can only hope that just one of the leftist elites tries to stop me from going in.  He might not eat a Chick Fil A but he'll damn sure get a knuckle sandwich.

I really like this! I will also be going to Chick Fil A for a sandwich today, though i rarely eat fast food. Still, i will be there.

Good for you, anon! Every fight we make in defense of freedom of expression, and against the oppressive liberal mandates, is a small victory.

First, I wasn't aware any body could hinder a person's right to do business due to their beliefs. We don't like large mosques being built in our neighborhoods either, but in the case of Boston, the outspoken mayor financed with city coffers an unwanted mosque in his town and attended it's grand opening after telling the world Chick fill A would not do business in Boston because of the owners beliefs.

Chicago, L.A., Mountain View, etc., have all said they would not allow a Chick Fill A. I just don't think that can be legal, can it?
That said, I am so happy to see how millions turn out across this entire country to buy chicken in protest to the sick homosexual demands made on us all. Now I just wish our politicians would get the F**KING message that this country is angry at these minorities kicking the snot out of this once great country. I heard the Reverand Owens speaking on Rush Limbaugh's show this AM saying, " I did not march one foot, one yard or one inch so a man could marry a man or a woman could marry a woman. These people are dragging the civil rights movement into the sewer" He marched with Martin Luther King for something that was important and now is treated like a joke to support any perversion that wants to cross the street today.
Well, I for one, am happy today to see Americans wake up. Now stay awake and lets us get busy taking this country back out of the hands of perverts and fools.

Hey Ken, read my blog tomorrow about my visit to Chick Fil A here in Phoenix! It was an adrenaline boost like you wouldn't believe!

Ken, if a city denies a business license because of an expression of religious belief, that is illegal and is a Civil Rights violation that can result in a big award to the business/person that was discriminated against. These Mayors spouting off against the owner of Chik-Fil-A had better listen to their legal advisors and shut up. If Boston or Chicago denies them a permit, the citizens of those cities will be writing a huge check.