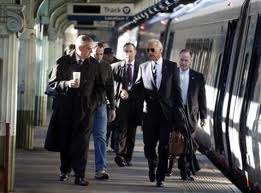 Vice President Joe Biden was on a campaign stop the other day.  Addressing a primarily African American audience he sure told them how he "feels their pain".  He then went on to say that, if Romney is elected President, they'll be "back in chains".

Yes, Joe really feels African American pain.  For thirty plus years, each evening Joe Biden has boarded an Amtrak train, subsidized by billions of taxpayer dollars, and headed out to his palatial estate in Delaware.  He has bragged often about working in Washington but being at home in Delaware every night.  No, Joe Biden will not stoop to walk the murderous streets of Washington D.C.  Except at election time does Joe even contemplate entering the Black neighborhoods where poverty and crime continue to rise.  No, good old Joe is ensconced safely in that Amtrak car headed for "whitey-ville".

Old Joe Biden and his "clean cut, well spoken African American" boss (his description, not mine) blew through $787 billion dollars and managed to cause African American unemployment to rise from 12% to 20% in three short years....but Joe Biden is really worried about Blacks being put back "in chains".

So there's good old Joe Biden, standing on the campaign stage championing the fact that he and Obama have managed to significantly increase the numbers of Blacks who have joined the Obama-Biden Food Stamp and Welfare Army.  They now number in the tens of millions as businesses refrain from hiring workers in advance of Obamacare and huge tax increases.

The Black community has largely embraced the Obama-Biden plan.  They swallow the empty threatening rhetoric as they have always done with Democrats.  This November these "unchained" Blacks will go to the polls and 90 percent of them will vote for the Obama-Biden ticket.

Meantime Obama can be found at Camp David, or on the golf course, or on the windward side of Oahu, or Martha's Vinyard...and old Joe Biden will be commuting to Delaware on that plush billion dollar train.