I Just Want "Triage" in November 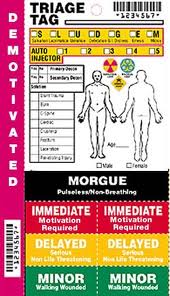 Triage is the art of prioritizing treatments for an ailing patient.  America is sick and getting sicker.  Here's what needs to be done first:

I'm not looking for Mitt Romney to be the next Ronald Reagan.  I hold no hopes that Romney will be able to fix all of our nation's ills.  I just want Mitt Romney to "stop the bleeding".

I want a President that understands business, is acquainted with how over-regulating and over-taxing a business will kill it.  Since over 70% of all jobs are created by small business I want someone who will encourage small business prosperity, and not instill fear in the business community.

I want someone who believes in the America I grew up, and prospered in, and not someone who wants to re-design America into a Socialist state.

I want a President who didn't learn his politics in the corrupt political denizens of Chicago, whose credo is search and destroy, lie, cheat and demonize those who don't agree with you.

I want a President who will stand on principle and not pamper and coddle and distribute welfare checks and government contracts to those who might mean an extra vote or for those who gave campaign donations.

I want a President who tells me the truth no matter how ugly that truth may be.  I want a President that will rein in excessive spending and fight like hell to eliminate fraud, waste and abuse in government programs.

When a piece of legislation crosses the President's desk I want him to look at the cost of that legislation; show me the bill long before the "banquet" is over.

I want a President who will not promise me all kinds of government goodies, knowing the bill for those goodies will be passed on to my grandchildren.  We're supposed to be taking care of our children and grandchildren, not riding on their backs just to enrich our own lives.

I want a President who truly believes that their are no red states or blue states and lives by that belief, and not simply use it in a speech because it sounds nice.

I want a President that will take to task the corrupt Teacher's Unions and compel them to educate our kids well or go find another job.

I want a President that destroys the notion that victim hood is an acceptable way of life and that a government check and a food stamp card are "rights" and not a temporary privilege to lift you up.

I want a President who will support tort reform and drive down medical costs by 20% just by ending frivolous lawsuits against our hard working doctors.

I want a President that doesn't formulate military policies to construct a "designer military"; I'll stand behind the 300 years of military tradition that kept our military moral and strong and maintained our freedom.

I want a President that fosters an environment that creates jobs, not one who picks winners and losers like Solyndra and Energy 1 and Government Motors.  I want every green energy business to start out on a level playing field so that the efficient survive and those that aren't die a natural death without the aid of taxpayer money.

I want that $16.7 trillion dollar national debt trimmed year by year and I want America to live within her means.

But, for now, I'll settle for "Triage"; stop the bleeding...the America we knew is dying, and our current President is hastening our demise.  Time for a better version of "Hope and Change".

You want a daddy to solve your problems.

Anon, here to fore, I've allowed your "serial blastings" where you post blather without any substance. In the future if you can't post valid points to dispute what i write you'll be deleted. Nuff said.

Now to address the flimsiest wisp of your reference for a "daddy", no, we conservatives don't need a 'daddy' like Obama, as you liberals do. We don't need "daddy big government" to tell us how to live our lives.

I want a president that takes the wind out of people like "anonymous" there so we can repair this country without a constant battle with the likes of the ACLU. By tort reform that can be accomplished. Then you might need to be held accountable for stupid behavior.

Anonymous accuses you of exactly what he/she demands of the government. I wish they would just go away.
Thanks again, keep giving 'em hell...