If I Were Writing The Republican Platform On Abortion 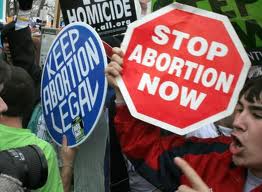 Against Mitt Romney's own policies about abortion, the Republican National Committee has placed a "no holds barred" abortion policy into the Republican platform.  The committee has gone on record as being opposed to abortion, even in the case of rape and incest.   Romney will clearly not endorse nor enforce this portion of his party's platform.  He has said so repeatedly, and condemned Senate Candidate Akin for his insensitive remarks.  Romney urged Akin to step down.   Most of the Republican party are also against this extreme ban.  Why?

The abortion issue is poison.  There are simply too many sharp edges on the abortion issue.  I just read a Gallup poll which said 51% of Americans are now pro-life; that's a significant increase in those who oppose abortion.  However, that pro-life poll reveals several nuances.  Twenty percent of those pro-life folks are willing to make exceptions when rape, incest or the life of the mother is involved.

Those on the left believe that government should never be involved in a woman's choice to abort her own fetus.  On the surface that may sound reasonable to the Democratic party.  However, when you dig beneath the surface you find all kinds of instances where abortion is indeed "murder" and is often abused.

For example, when one googles the abortion issue you find thousands of instances where women are using abortion as a form of birth control.  Case studies show women who have aborted as many as 15 times.  One Health and Human Services study showed that Black women abort at five times the rate of whites and Hispanics.  Is a failure to take a birth control pill justification for aborting children?  There a hundreds of adoption agencies perfectly willing to take in unwanted children.  Too, over the last decade, hospitals and fire departments have set up a "no questions asked" drop off policy, where women who have a baby they don't want, can simply drop the infant off at their nearest hospital or fire department where they will be accepted without a question being asked.

And I won't sicken you by showing you fully developed infants who are aborted in late term, and often for no valid reason.  That type of "killing" adds fuel to the fire for those who have strong feelings about any type of abortions.  According to the New York Times welfare mothers abort at 8 times higher rates than non-welfare mothers.  Should those who oppose abortion be required to fund with their tax dollars something they are morally opposed to?

If I had to guess I would say that most people are not radically opposed to abortion in certain circumstances; this includes millions of conservative voters.  What we do have a problem with is the government's use of our tax dollars to fund abortions, and the liberals' false assumption that conservatives are trying to control what a woman does with her body.

If I were sitting on that Republican Platform Committee I would urge the party to hold firm with their stand against abortion.  However, I would add the caveat that abortion is permissible for rape, incest or the health of the mother.  To do otherwise is absolutely wrong.  I cannot imagine the level of anger I would harbor against government if a female in my family were forced to carry to term the sperm of a rapist or sex abuser.  Nor would I ever be willing to risk the life of a loved one, simply to preserve that fetus.

I would suggest conservatives adopt a different route for ending the mass killing of fetuses.  Let's first show compassion for victims of rape and incest, or to protect the health of the mother.  Then, let's work to defeat legislation that funds abortions that occur simply as a matter of convenience, or as a perverted form of birth control.

Finally, let's repeal Obamacare, a program that forces religious organizations and American taxpayers to pay for a medical procedure that they strongly believe is immoral.

Please give specifics about the case study in which a woman was shown to have 20 abortions. Which case study? By whom? Please detail these facts and provide your source.

No....I am finished providing links to sources just to satisfy those who are too lazy to do their own research. This is not a scientific paper, and you are not paying me to read this, so do your own research.

I'll make it easy for you; google "Irene Villar"; and read about her own writings about having 15 abortions just to spite her "over-controlling" husband.

I just googled this subject again...you will find dozens and dozens of sources for multiple abortions if you really want to learn about it.

I stand corrected; the most abortions that I have found documented was 15 abortions. Also, while doing further research I found that New York City is the abortion capital of the world with 74 abortions against 100 live births. Also found that 83% of women who get abortions are unmarried.

I also learned that a Planned Parenthood Clinic Counsellor in Arizona and Texas was more than willing to perform an abortion for women who didn't like the gender of the fetus. Sad.

In your article you stated she had 15 abortions so there is no need to apologize, I believe the reader made a mistake. I thought they passed a law in AZ recently banning abortions solely based upon the gender of the fetus.

Yes, anon, I made a mistake, and later corrected the number in my blog. Arizona did pass a law that bans abortion simply because the mother does not like the gender. However, that is very hard to prove so it is wide open for abuse.
All the mom has to say is she wants an abortion; she doesn't have to say why.

I have just found your site and will return often. I do ask that those writing as anonymous have courage and place some form of handle in their posts. I am Catholic and unequivocably, without reservation, against abortion of any kind. You cannot claim to be Catholic and sign up for killing a baby under any circumstance. You may have been brought up Catholic but you do not follow the Creed of Catholics. Don't claim to be one unless you have the courage to BE one.

What Coveman said!! My Catholic, 87 year old Mom has assured me she is voting for her first republican president ever based solely on Romney and Ryan's stance on abortion. It has taken years of my showing her how all her democrat and democrat Catholic Congressmen were all pro abortion among other things to finally convince her of the hypocrisy of her party.
She would take me to hand out pro life literature at events when I was quite young. This left a very strong impression and opinion on me with regard to this issue. Per Catholic teaching killing babies for any reason is a Mortal sin period. That's just the way it is. I have left the church because of all the wavering on this issue and others. I understand this new Pope takes a firmer stand on the issue, maybe that's why my mother changed her mind, don't know but whatever it is, it's a move in the right direction.
I have always felt the decline of our country started with Roe V Wade. It seems all personal responsiblity in many aspects of our lives went out the window with this decision by the court.
As usual though, as the whole country is self destructing, still another Presidential election will be framed by this disgusting immoral issue. Thank you democrats. There are other issues out there.

Ken, we finally disagree on something; I hate the millions of abortions that have occurred since 1973, hate the way some women are so callous as to murder, but....there is no way I want a female loved one in my family to carry the child of a rapist or have the victim of incest bear the child of an abuser. And finally, if it comes down to the health of my daughter or the fetus, I'll vote daughter every single time.

Sorry, we'll have to disagree on this one.