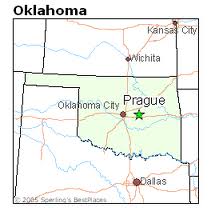 I was born in Prague, Oklahoma.  My family moved away from there when I was four years old.  Thank God.  Yesterday we learned that the high school valedictorian at the Prague high school was told she wouldn't get her diploma unless she apologized for using the word "hell" in her valedictorian graduation speech.

It seems the term was used in relating her response when asked if she had decided on a career choice.  She responded "hell, I don't know".  Those present at that graduation responded with laughter and applause.  All except the "word police" in the school administration.

The principal is adamant that the young lady apologize for using that dastardly word before she can hope to get her diploma.

I suspect the principal failed his civics class.  I would also suspect the man never served his country in the military; too many died to give that young lady the freedom to say what she will, whether we agree with the language or not.

The young lady is getting ready to attend Southwestern Oklahoma State University beginning next week.  Give her the diploma and let her get along with her life.

They don't want me on the jury. The school district couldn't afford it.

I agree, anon. Don't think it's get that far; the school admin. will fold like a cheap paper plate and give the poor girl her diploma.

Now that is just ridiculous!!!! What in the HELL is that man's problem!! I'd like to give him a good jab in the eye!! Give the girl her diploma!!!

Darlene....honey....I would never want to be the one to withhold a diploma from you! :)

I'll bet the principal is just some redneck republican trying to impose his beliefs on others. It just shows how narrow-minded he is. The young lady should tell him to put the diploma where the sun doesn't shine, contact the university and tell them what's going on. Her school record should speak for itself, and she doesn't really need the diploma.

Anon, it has been my experience that censorship these days comes more from left wing liberals who, if you do not embrace their beliefs, tend to demonize you.