One Red Sox Hat And Shirt (XXL) For Sale 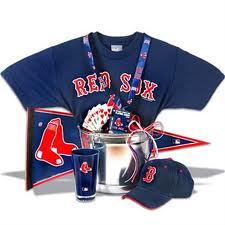 When I lived in San Diego I was a long suffering Padres fan.  Year in and year out i watched a $30 million dollar payroll team trot out to the emerald diamond and lose a hundred games or more.

Then a few years ago the Padres got lucky.  The Texas Rangers needed some pitching to make a pennant run and then GM Kevin Towers sent them two washed up pitchers for Adrian Gonzalez.  When I first saw Adrian stride to the plate and take those beautiful practiced swings I was reminded of the bat grace of the great Tony Gwynn.

Adrian pounded that ball all over PETCO park, and, remarkably, out of it.  He had no one batting behind him so he walked a lot.  But he was still able to hit 300, homer 30 times a year and, impossibly, drive in over a hundred runs a year.  Adrian was playing for peanuts all those years since the team had him under early career "control".  Adrian never whined or cried about it and never demanded to be traded from a Triple A quality team like the Padres.  He just kept winning Gold Gloves at first and doing his 300/30/100 every year.

While a good citizen at the ballpark, Adrian was equally admirable in the San Diego community.  He didn't just give money to worthy causes; he was in the kids wards of hospitals and out on little league fields teaching kids how to be a good person.

Then, it came time for Adrian to free agent his way to the big bucks he deserved.  He sat down for the perfunctory talks with the GM and offered to take a home team discount.  The Padres, to please the fans, acted like they wanted to keep him.  They didn't; they knew they would never be able to even come close to paying the going rate for Gold Glove hitting wonders.  So they traded him to Boston.

As a "west coaster" I've always had a soft spot in my heart for the Sox.  Until 2004, Big George was buying pennants up there in New York and I hated him for it.  When the Sox finally broke through I cheered as loudly as Stephen King or Mike Barnacle.  When the Sox got rid of Manny I liked them even more.

So, my favorite player, Adrian Gonzalez gets traded to the Sox.  I was very, very happy.  I went out and bought myself a Sox hat and shirt and adopted the faraway Sox as my new forever team.

Yes, I was disappointed with the Sox big fold last year.  I never thought it was Terry Francona's fault; I like the dude.  Sometimes shit just happens.

So, I began this season with my Sox shirt and hat and a whole new supply of hope for my new team.  Then, I begin to see cracks in the morale of the team.  I begin to see Valentine sending a Gold Glove, slow footed first baseman out to right field.  I begin to read Valentiine's snark almost on a daily basis.
Then, I read that Adrian Gonzalez was upset about Valentine's managing, and dared to voice his displeasure.  Adrian Gonzalez?  This guy put up with unbelievable crap in San Diego and just quietly went out there and gave 100 percent on the field!  Adrian Gonzalez?

So, last night we read that the Sox are sending Adrian out to the Dodgers.  Valentine stays to pollute the pond and they send away a guy that hits better than $204 million dollar Prince Fielder (at half the price).

Well that's fine.  Let the Sox stew in their own bile.  Big mistake.  Adrian Gonzales will still be hitting 300/30/100 for the Dodgers.  Meantime, I've got a hat and shirt for sale.  Any takers?

Life long Sox fan out here in AZ but originally from MA. I agree with you that it sucked to see Gonzales go but it had to happen. The only way they were going to unload Beckett and Crawford and their overpriced contracts was to sweeten the pot. Now if we could only get rid of Cherington, Bobby V, and Lackey we could start preparing for the 2013 season.. BTW I have a nice Beckett jersey for sale as well!

Thanks, anon. Just heard on MLB CHANNEL that Adrian is starting at 1B for the Dodgers tonight. Go Dodgers!

Thanks for reading and taking the time to comment!