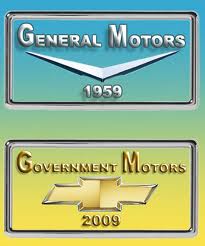 When in 2009 General Motors was making plans to file for reorganization bankruptcy the plan was to re-negotiate in bankruptcy court a change in the $75 dollar per hour union salary and benefits rates for GM unions.  GM knew that paying out $75 bucks an hour for making Chevys wasn't competitive with Toyota and Honda who were paying their workers in Tennessee and Alabama $30 bucks an hour.  Had General Motors been allowed to execute their bankruptcy plans through the court system GM would have honored three hundred year old American contract law and paid off their bond holders, negotiated competitive labor rates and emerged as a much stronger and healthier company.

Then newly crowned "emperor" Barack Obama stepped in, decided he just had to reward those labor unions for their electoral support.  He appointed an auto czar who would decide how GM emerged from their financial troubles.  The first thing our Socialist President did was to ignore three centuries of contract law and tell the bond holders of GM to "go to hell, you lose".  Secondly, Obama gave half of the company to the auto unions working at GM.  What did they pay for half the company?  Not a dime.

So now, here we are three years later and GM still owes the American taxpayer $37 billion dollars.  (Remember all those big banks that Obama demonized?  They have paid back every cent, with interest, to the treasury)  But GM and their Union partners still owe us big and they have never been able to make enough cars and profits to get their stock price high enough to be sold and pay us back.

Alas, today, Treasury Secretary Geitner just announced that the U.S. Treasury will not be getting full payment for those massive GM loans.  He took out his calculator and determined that the final unpaid bill to the U.S taxpayer will be a $25 billion dollar loss.

I guess GM goes into the Obama debit column along with Solyndra's $500 million dollars and the $200 million given and lost with green battery maker Ener 1 and the dozen other solar companies that contributed to Obama's campaign and rewarded handsomely.

Just recently I read that Obama spent $1 billion dollars to get elected in 2008.  I contend that amount is under reported.  Once one adds the bribes to auto unions and solar companies one sees that getting Obama elected cost the taxpayer closer to $30 billion dollars!  (And we won't even count the Chicago water parks and rat preserves bought and paid for with the 2009 stimulus money!)