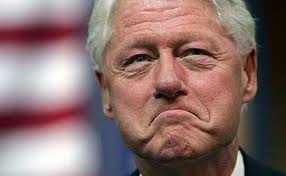 How many times have you heard Democrats boast during the past few years of Bill Clinton's fantastic success in boosting the American economy.  They also assert that Clinton's tax hikes were the reason our economy began to take off in the mid 1990's.   Let's look at the facts to see if success should indeed go to Bill Clinton, or whether other factors were in play.

When Clinton took office in 1993, after campaigning on a "I feel your pain" mantra, the economy remained sluggish during that year.  One of the problems dragging the economy down was that Bill Clinton, like Obama, led off his Presidential agenda with HillaryCare, the 90's edition of Obamacare.  Hillarycare proved to be a disaster and we're more than willing to give Clinton credit for abandoning it, unlike Obama.

Still, by early 1994, Bill Clinton was still spending like a drunken sailor, having generated additional revenue through tax hikes on the middle class; and the economy continued to stumble.  Then, during the next twelve months two things happened to save Bill Clinton's bacon.  In November of 1994 the Republicans captured both houses of Congress through their Contract With America campaign.  Once in control the Republicans immediately cut spending, reduced regulation, and passed Welfare Reform which said to life long welfare tit suckers, "if you want a cent of welfare money you're going to have to go out and work in day care centers, rake leaves in the park or contribute something to the community.  The result of that legislation led to half of all welfare recipients voluntarily abandoning a welfare check and all of a sudden the federal government realized billions of dollars in savings from a program that had been ripe with fraud, waste and abuse.

The second fortunate thing that helped the Clinton economy came in the spring of 1995.  It was a stock market phenomenon called the Internet Boom.  From 1995 to 2000 the Nasdaq market index grew from less than 1000 to a peak of over 5,000 in 2000, before the bubble finally burst.  Anyone remember a company called Geo Cities and a share price of $1,305 per share (before it went bust)  Does anyone remember America Online and their stratospheric stock price?  Millions of Americans were playing the Internet market (to their eventual detriment) and the only winner in the end was the federal government who gained trillions into the national treasury in capital gains revenue.  However, during that five year period the federal government ran a balanced budget for four of those five years.  The combination of Republican budget cuts and the Internet boom allowed Clinton to claim sole victory for those who are naive enough to believe him.  He never mentions the Contract With America and the Republican revolution of 1994.

Here's a look at how that Internet Boom, with those explosive capital gains tax accruals contributing to federal revenue during those five years: 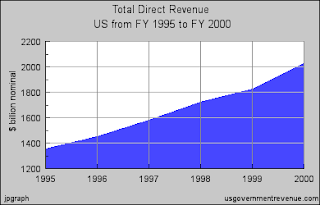 Here's what the Congressional Budget Office said of capital gains revenue during the period:


"Largely because of the stock market boom of the 1990s, gains rose as a percentage of individual income tax receipts from about 7 percent in each year in the first half of the decade to about 12 percent in 2000. The jump in realiza- tions in the late 1990s accounted for about 30 percent of the growth in income tax receipts in excess of GDP growth that occurred from 1994 to 1999.3"


What Clinton won't talk about is the year 2000 when the Internet boom busted and left America again in a recession, just as he was fortunate enough to be leaving office.

Let's be fair to Clinton; while he can't truly claim sole credit for the prosperity of the late 90's, at least he didn't declare war on business, and, after refusing to sign Welfare Reform on the first two go-arounds, he finally did sign it and told America, and I quote "the time for big government is over".  Was Clinton an economic guru?  Well, the CBO statement and the above chart shows Clinton just happened to be there at the right time and was smart enough to get out of the way of business and let it prosper!

Now we have a President who demonizes business and says loud and clear "the time for big government is now!"  Oh, remember that Welfare Reform that Clinton signed?  Last week Obama told those on Welfare that they didn't have to trouble themselves with seeking work...he's ready to grant one of his notorious "waivers".   And a balanced federal budget is but a distant dream.

Please show a quote from Obama in which he says, as you stated, that "it's time for big government". Specifically, that quote. Let's see who is truthful and who is not.

The term was first used by President of the United States Bill Clinton's chief political advisor Dick Morris as a way to describe his strategy for getting Clinton reelected in the 1996 presidential election. It is often referred to as "Clintonian triangulation". Morris advocated a set of policies that were different from the traditional policies of the Democratic Party. These policies included deregulation and balanced budgets. One of the most widely cited capstones of Clinton's triangulation strategy was when, in his 1996 State of the Union Address, Clinton declared that the "era of big government is over."[1]
[edit]

How typical of a GOP robot. Are you also a Christian? I ask that because they can't prove anything that they claim either. Opinions are one thing and facts are another. You can't show me a single quote from any Democrat that says, "the time for big government is now". You invented that quote based upon your opinions and slanted view and, by doing so, are no better than any of the deceitful politicians that you are criticizing. Why don't you re-enlist so you have something tangible to salute?

Anon, I seriously question who's the robot, and who's swallowing the "kool aid" without proof. I just cited statistics and charts and CBO reports and you ignore the whole thing because you don't agree with me.

This is so typical of liberals, attack, cite no proof, and ignore all proof presented. This is why liberals are so empty and vacuous. While your screams might win you a shouting match you always lose the argument because you have nothing substantial to say.
Sad.

Your retort is the equivalent of, "Oh, yeah....well, you're a poopy head". Why, when confronted with your deceitful Obama 'quote' do you not admit that it is a lie and that you constructed that context to make your blog's point? Using slander and defamation as a backup to your original comments only make you look hypocritical. How sad, indeed.

anon, your last response was much more characteristic of a juvenile "oh yeah". I provided stats, charts, and CBO reports; you provided nothing. I don't think that even ten percent of both Dems and Repubs think Obama is not a big government "believer". From Obamacare whih eats up 1/6th of our GDP, to his dispensation of government largess to win favor, to his demonization of business, Obama has more than proven he believes in the religion of big government. Now, I'm not going to engage you in empty discussion. If you're next post is still a generalized liberal mantra it will be deleted. If you want to distribute your empty liberal pap start your own blog.

One thing liberals never do, of course is speak metaphorically! That by the way is sarcasm Mr. Anon. I have read and agree with the JCS here, you are vacuous. The depth of your argument, nobody said big govt.. OK fine, nobody said it, but in fact the deed is done, government has grown by leaps and bounds. Go back to your basement and read a little more.
JCS I do admire your ability to argue with these idiots, I get so frustrated I want to just...

Ken, it is not hard to argue with them because they never fight with facts. They attack, cuss, call you racist or tea bagger or rethug, and such. When there words hit the light of day they look stupid because they are.

You cant argue with a sick mind.You foregot to mention that Clinton caused this resesion with three of his signuters.First was removeing the protection that kept banks from becomeing world banks. Now if the Euro fails so do our banks.The second is letting pension plans invest in the stock market poof your pension is gone.With banks at a no interest rate people think they no choice but to invest in the stock market poof your money is gone.

What Clinton did do wrong was to support the repeal of Glass Seagul, a law which prevented banks from turning themselves into "trading houses", which resulted in those exotic CDO's and were the cause of the housing crash in 2008.

Anon, you're proof positive that liberals are poorly educated. Your literacy skills are severely lacking: go back and read it again...Clinton's excessive spending...until the 94 Republican election which put them in control of both houses of Congress...'

Either you can't read properly or you are desperately trying to grasp at some small life buoy...either way, you lose.