Death Of "The Weekly Reader" 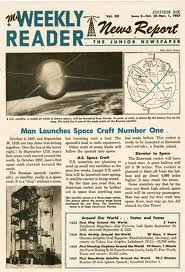 I was so saddened to learn last week that The Weekly Reader is ceasing operations this month.  I'll bet there's not a single American alive today that doesn't remember that little three or four page newspaper, printed just for us school children, passed to us in our class each Friday afternoon, and meant to let us know that there's a whole big world out there!  What respect we children were given by the Weekly Reader folks.  They never wrote "down" for us and expected us to be interested in our world, so we were!

The Weekly Reader began publishing in 1928 so this little publication is what both grandpa and grandma and grandchild have in common.  We all had the privilege to learn about geography, advances in science, social studies and history, all written for the child's eye.

I remember a 1957 issue of Weekly Reader when NASA wrote of putting a man in space; they boasted that this "spaceman" would be orbiting the earth fully 300 miles above the earth!

I can remember when my children started bringing the Weekly Reader home from school.  It was such a thrill to see something in their time that was read and honored in my time as well.

One interesting note; the Weekly Reader always conducted a "mock" Presidential election where school kids across the nation voted for President in the classroom.  The votes were tabulated and sent to the Weekly Reader offices for the nation-wide count.  Amazingly, these kids voted for the winner in 13 of the 14 elections covered.   So, if you want to know who's going to win in November, ask your kid!

So now, sadly, another long held American tradition is disappearing from the scene.  I'm old enough now that I've had to bid adieu to many things that were golden in my youth.  The Weekly Reader is just another great memory to surrender to the times.