Obama Behind A McDonald's Counter? 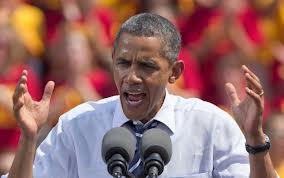 Barack Obama loves to paint Mitt Romney as a spoiled "rich kid" not in touch with the every day lives of the American people.  Of course Obama and his army of liberal mud-slingers never reference Mitt Romney's donating his father's inheritance to charity, saying "I want to make my life on my own".  Nor, will Obama and the libs mention that Mitt and Ann started out their marriage in a basement apartment, with a board and a couple of saw horses for a table.

Now, I have a question for Barack Hussein Obama, and his legion of liberal lip.  How did Obama live his entire life without ever having a real job?  How did Obama manage to take a girl on a date at sixteen, or buy a corsage for the prom, or pay for gas, or even for his dope, without ever working behind the counter at a McDonald's or Burger King, or mowing lawns?  We all did it!  How did Obama escape the normal evolution from "cared for child" to taking that first menial job?  How did Obama develop such a strong assumption of "privilege" that he was able to get others to pay for his life of privilege and comfort?

Could he have grown up thinking that, because he's half Black, that the world owed him a living?  When we were stationed in Hawaii my wife worked and I took a second job to send our kids to Catholic school.  We could have never afforded to send even one of our children to the elite and private Punahou School that Obama attended!  My kids were half Asian but not for a moment did we even dream that we could score an expensive private school education just because of ethnicity!  We were Americans, not Asian American!

Yet, in Barry's world, he grew up hating a country that had so much and he seems to have been bound and determined that he would be on the receiving end of a little 'wealth distribution'.

In a way I feel sorry for Barack.  He could really use a resume of "flipping burgers" for this campaign because America is tuning him out and knows damned well he's one of the spoiled "minority elite".

Somehow Barry was able to grow up, enjoy all the finer things in life, and never have to stoop to flipping burgers, mop a floor, deliver a newspaper, or even man a lemonade stand.  He was able to travel the world and attend the finest American universities on minority scholarships, tax-payer grants and low interest student loans.  And he was so charming there was always someone around to pick up the bill for anything Obama wanted.

So, as Barack Obama attacks Mitt Romney for being out of touch with working Americans, I have to ask him "how in hell would you know what a working American's life is like?"

Hey Mr. President; if you really want to "feel our pain", when we send you home to Chicago in November, take a job in Burger King...or Chik Fil A (they're an equal opportunity employer) and wait for that first pay check.  See that big government has taken half of it in taxes...then get back to work at that counter; before long one of your campaign supporters will be in to buy a Whopper combo with a food stamp card..that you paid for with that miserably small fast food paycheck.

POST SCRIPT:  I just learned that Barack did indeed have a job.  Thanks to poster "Mully", I learned that Obama worked for Baskin Robbins sometime in 1978.  Came across a statement from Baskin Robbins as well.  "We're the training ground for Presidents!".  I thought that was cute.

He didn't work at McDonald's when he was younger. He worked at Baskin Robbins. I fail to see the difference.

Thanks, Mully. After your comments I googled it and found out he did indeed work for Baskin Robbins! I've post scripted that on my blog.

For fear of offending you I won't comment on Obama's "ride" through the land of the minority intellectual elite and their "guided" progressive career journeys. I truly don't believe he learned any "blue collar" in the lofty heights of elite academia.

@ Mully: Obama was a law lecturer, not a practicing attorney. He's never seen the inside of a courtroom representing a client. His law degree/license is mostly for show. I've been a real lawyer for 15 years.

Randy, you said it far better than I could. Thanks.

Any one remember the Movie "Coming to America" -with actor eddie murphy???????