Be Honest! You Wanna Punch Them! 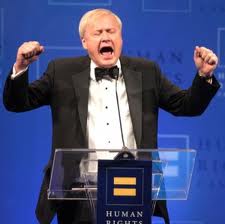 This morning on Morning Joe, on MSNBC, the chairman of the Republican National Committee made an appearance.  Joe and what's her name were augmented by Tom Brokaw and Chris Matthews, all allied to pimp Obama and attack Republicans.  This morning's show was no exception.

Before Preibus got a word out of his mouth, Chris Matthews (he of the "chills down my leg" at Obama's inauguration) went on the attack immediately.  He had spittle jumping out of the corners of his mouth as he went into a long and sorry dialogue about nasty Republicans.  The first thing I thought was, why bother to have guests on if the MSNBC talking heads are going to do all the talking?  Why don't they fore go having Republican guests at all?  They can simply join hands and have a big liberal love-in for their  "anointed one".

My second reaction was wanting very much to punch Chris Matthews squarely in the mouth!  Okay, all you "holier than thou" readers; call me a violent thug.  But, I will say right now, the anger in this country is rising.  The bile is rising in our throats because never have the stakes in this election been so great.  If you're a liberal you want to maintain and expand the reach of government.  If you're conservative you know that we are rapidly approaching the point where Americans can turn back to embrace personal responsibility and individual freedom.

And, admit it folks!  You see your adversaries and sometimes you get so angry that you really do want to punch them in the mouth!  If you care at all about our country you have strong feelings and sometimes those feelings evolve into anger.  So don't tell me you have not had moments where you wanted to jump right through that TV screen and punch someone right in the kisser!

Here's who I want to punch in the mouth:  Everyone on MSNBC, from the spittle strewn Chris Matthews, to the smug Rachel Maddow, to the snarky "uncle Tom", Joe Scarborough.  I want to punch Debbie Wassermann Schultz, Michael Moore and Janet Napolitano.  I really want to punch out Fast and Furious Eric Holder.

I don't want to punch out Vice President Joe Biden...he's too stupid to waste a punch on.  However, there are times when Obama goes into his angry black mode that I want to punch the supercilious, minority pampered socialist son of a bitch right off the podium.

Note:  If you enjoyed my little "tongue in cheek" diatribe, please consider hitting the share button.  Also please use the comments section and let me know who you want to punch in the mouth and why..liberals are welcome as well.  :)

You actually watch MSLSD? Really? You're right the anger is building, only now, the right wing is getting mad. The left has been mad for years while the right assumed the fetal position and just took it. Well, no more. The libs howl in protest when they are treated by conservatives the same was as they have treated conservatives for decades. No quid pro quo is acceptable by the libs. Unfortunately for them, the rage is coming their way. And, you know what? It's LONG overdue.

Randy, I watch snippets of MSNBC once in awhile the way we sometimes stare at car wrecks...and yes, I love the fact that Independents and Conservatives have finally had enough from whining government tit suckers and are finally fighting back!

The list is waaaay to long! All execs at NBC,CBS, ABC and PBS. Everybody who voted for this administration, etc,etc,etc.. I went and saw 2016 yesterday, the audience stood and clapped at the end. A standing ovation at the movies, a conservative documentary, no less!! Yes, we are god damned angry and I hope the anger continues to well until things are made right!

My mother, a life long (87yo) democrat but no longer after obama just saw 2016 as well. She was calling all her friends last evening to tell them about the movie and how angry she was that she hadn't heard any of those things mentioned in the movie. She relies on the MSM for all her info. "SAD, DAMN SAD", right JCS?

Did I mention, 2016 was a great movie, and all you conservatives should do your country a favor and take a liberal to see it. I say take them so your sure they sit through the whole thing and if they come out still convinced lib is the right way, you will know they are either lying or truly sick in the head. We might take this thing back with more info out there like this flick.

Aww, Ken, you could have listed someone specific so that I could imagine you slugging the numnut..that would have been more fun! :)

I love PBS programming except for the news shows. I also like NPR shows also, when their politics are not evident. I find PBS and NPR one of the few sources for very complex information and deep discussion.

Thanks Ken! Next time you're mean, be specific! :)

Fine, line up for a good ass whoopin', Al Franken, Al gore, debra wassername, nancy palosi, barbara lee, jesse jackson,and harry reid, that should take care of the morning workout and you if you keep disagreeing with me (just kidding, I love your writing too much), every time I watch PBS everything seems to have a political message shot into it making it hard to watch. I seem to end up there alot though. A whole lot more than msnbc, I like Randy's "mslsd", good one! I know your a writer and need to hear other views, but how can you sit through any portion of those broadcasts??

Thanks, Ken! I want to also add Harry Reid to my list...and Maxine Waters!

Back at ya, Ken...you watching something on PBS? :)

Seriously, thanks for having my back, Ken!