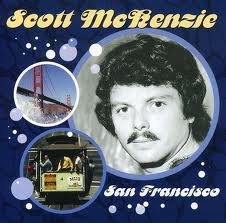 Just learned that Scott Mckenzie has passed away.  Just another 60's icon leaving the scene.  Scott McKenzie was not a huge music star but he did sing one of the major anthems of the 60's; "If You're Going To San Francisco".  The song was released in 1967 during the "Summer of Love", the advent of San Francisco's Haight Ashbury's celebration of drugs and music and the anti-war movement.

Ironically, the love for "San Francisco"by most of America was proof positive that widely diverse groups could come together to agree on a few things if we just lowered the tones of our angry voices.

Those hundreds of thousands of America's youth who voyaged to San Francisco that summer to seek answers about themselves, to explore radical new ideas about society, about war, loved the beckoning call of McKenzie's urgings; "come...and wear some flowers in your hair".

That same summer another group of American youth would pass through San Francisco.  A hundred thousand young American military men and women, bearing duffel bags over their shoulder, would board military aircraft at nearby Travis Air Force Base, bound for a year's tour of duty in Vietnam.

While civilian youth partied in the streets of Haight Ashbury that year, 550,000 American troops would be tromping through the jungles of Vietnam, flying sorties over the Ho Chi Minh trail, or manning bunkers at bases throughout Vietnam.  When time allowed, the G.I. turned on his transistor radio and listened to Armed Forces Radio.  When "If You're Going To San Francisco" hit the air waves, the G.I. would long for hearth and home.  It became their anthem too, for it was San Francisco where they embarked on the greatest adventure of their life and it was San Francisco that would be that delicious "port in the storm", that place that would welcome them back if they were lucky enough to live through a year in Vietnam.

So, McKenzie's anthem was revered by all of America's youth, even as they traversed two different roads to adulthood.

Unfortunately, as many of those Americans returned from Vietnam any spirit of gentleness, of love, had soured.  The Haight Ashbury generation, not seeing a politician at hand, chose to hang out outside military gates to cuss and spit in the face of military men whose only crime was serving their country in time of war.

But, thanks to Mckenzie's gentle anthem, for a time we all longed for love and peace...and home, and we were all singing the same song, even if for different reasons.

RIP Scott Mckenzie.
Posted by A Modest Scribler at 5:43 AM