Obama Has Been An Outlaw All His Life 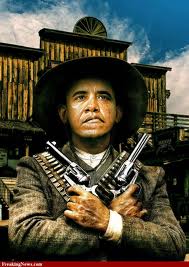 Is anyone surprised by Obama's latest circumvention of the Constitution by choosing not to enforce U.S. immigration laws?  How many times have we seen this already during Obama's term in office?

Our first hint that Obama was lawless was in his selecting socialist "czars" to implement his socialist agenda by ignoring the legislative branch of our government and rule by decree, much like a Latin American dictator.   To date, Obama has named 50 or so program czars that mandate all manner of socialist initiatives.  He began by commandeering large swaths of that trillion dollar stimulus money to reward campaign contributors.  Thus we saw Solyndra crash and burn with $500 million of taxpayer dollars.  Then came ENER Corporation that declared bankruptcy last year and took with it tens of millions of taxpayer dollars.  Collectively, Obama has spent billions of taxpayer dollars to reward those who contributed to his campaign coffers.

At the outset of his Presidency Obama selected Eric Holder as Attorney General.  Obama badly needed a "white hater" to lead the charge on his quest to mount race warfare on middle class whites.  And Holder held up his half of the bargain by calling white Americans "fearful cowards".  When whites complained that Black Panthers bearing billy clubs to deter whites from voting at voter stations Holder elected to quash the investigation.  When America complained about the deaths of innocent Americans as an aftermath of a "Fast and Furious" campaign to furnish automatic weapons to drug dealers, Obama and Holder elected to cover up the mistakes from that disastrous operation.  When states suffering from the burdens of the illegal immigrant invasion, and tried to enforce American immigration laws, Obama and Holder chose to sue the states to stop enforcement, all to gain favor with a potential Hispanic electorate.

In keeping with that state of lawlessness, Obama instructed the Director of Homeland Security to cease and desist from deporting illegals who clearly violated our nation's immigrations laws.  To further compound the problem Obama has failed to reimburse the individual states for the incarceration costs of some 2 million illegal Mexican criminals.

Far more serious than all of Obama's socialist program initiatives has been his outright flaunting of the checks and balances built into our Constitution.  His arrogance led him to circumvent the authority of both the judicial and legislative branches of our government.  Too, he has implemented, by overstepping Executive authority such programs as forcing religious institutions to fund birth control and abortions which conflicts with their religious beliefs and are supposed to be protected by our Bill of Rights.  Further to that end, Obama, for the first time in our country's history, is mandating that Americans purchase health insurance, a clear violation of the commerce clause.

Obama has been an outlaw all of his life.  Whether it be his flaunting of our drug enforcement laws through his use and distribution of pot and cocaine, to his gaming of minority scholarships to attend our most prestigious universities, Obama has always carried an arrogance unseen in our nation's political history.

Millions of Independent voters voted for Obama in 2008.  Now those same millions of Americans are shocked by the blatant lawlessness this man has promoted throughout American society.  They can no longer be surprised by who and what they voted for.  Obama knows this; thus he must somehow garner "replacement voters" for those he "fooled once".   To accomplish this, and in an effort to get re-elected, Obama has now chosen an even more dangerous lawless approach to leadership:  1)  Coddle illegal immigrants 2) Coddle to gays 3) Coddle to Blacks by preaching racial warfare 4) Coddle to the poor by demonizing the middle class.

An outlaw through and through.  Sad.  Damned Sad.

This article says it all! What a dirtbag!

This article is ridiculous. Please if you dream of being a journalist one day, (since you are clearly not today), cite sources and put your name on this trash. Thanks.

Everything I cited in this blog has been documented in all of the above listed publications and news sources. Of course, if you're a liberal, you have blindfolds on so nothing derogatory about Obama and his minions are acceptable to you.

Love all of your blogs. I send them to my other friends who enjoy them very much as well. If only the sleeping and
clueless public could wake up. As bad as this administration
is we have to put some blame on the people who are so
distracted by the Kardashians and such that they vote in
their favorite celebrity. I'm losing faith in humanity,
It's not too hard to look down the road a few decades and
guess what it will be like. I hope gut feelings about
where we're going are wrong, for my kids sake.
Thanks for the great read as always.

Thanks, anon, for your encouraging words. Yes, indeed; we only have ourselves to blame for the direction in which this country is moving. Far too much attention is paid to the banal and far too little to what's really important.

In your commentary about lawless politicians, you neglected to mention the freedoms we lost under Bush with what he called the 'Patriot Act'. What's next? Romney removing all social services and calling it the 'Ice Cream Act'? Obama hasn't been a great leader or manager and I don't excuse the critical things that have been left undone during his administration. But if you are going to go the subversive route and talk about totally illegal acts, make sure you include the members of your party that also fit the bill. Doing otherwise is hypocritical.

Anon, you completely missed the point of my argument, intentionally or not. The Patriot Act, like it or not was approved by Congress, Democrats and Republicans; it was not "breaking the law or circumventing the Constitution.

Obama has chosen to circumvent Congress and the will of the American people by issuing executive orders for which he has no authority. In other instances he chooses which laws to enforce and which he chooses not to

As to what you say Mitt Romney will do, isn't that a little harsh and hasty? He's not in office; why do you level charges against him for things he hasn't even done?

Frankly, your argument is spurious, and sadly, do not refute a single thing I wrote about Obama.

"Cite your sources", "article is ridiculous", "what about Bush?", Geez will these idiots ever get it?
I remember hearing about the dumbing down of our children in the classrooms, well here is the result. Sad. If you cite your sources they wouldn't check to see if they were valid anyway. They would know already what you say is true if they read anything but the Entertainment section. Gleaning your news from the Rolling Stone doesn't make a body informed. Yesterday I was reading post from a fella in Boston who said he was having a conversation with somebody who had never heard of Fast and Furious but felt that Eric Holder was a great man.

Had these people read anything on obutthead's run for the senate they would have heard what a criminal he was. They wouldn't have believed nor cared though, very strange time.
Did you hear, Romney's a racist? That bastard
Thanks again for carrying the torch!
BTW: looks like your getting your message out there a bit more, good work

Ken, do you ever watch that feature on O'Reilly called Watters World..or something like that. Watters is some kind of staff gopher for O'Reilly..but sometimes he gets to go out and interview folks on the street (kind of like what Leno does). What we always inevitably see are folks who haven't a clue; they don't know who the VP is, they don't know who we fought to win Independence, they know nothing of how taxes are collected and spent...nothing! I think it's supposed to be a humor piece but it has the opposite effect one me...it's sad to know just how ignorant our fellow citizens are.

Even more repulsive are liberals who are also ignorant but simply drink the Obama/Pelosi/Reid Kool-Aid and repeat the same old empty charges and robotic mantras.