"Obama and The Buffett Rule; The Fairy Tale" 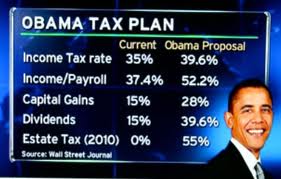 If there is any better evidence that Obama is trying to start, and win, a class war, you won't find better evidence that his mantra "Warren Buffett's secretary pays a higher tax rate than her boss!".  Anyone who cares to know the truth of this statement need only look at how different sources of income are taxed.

First of all, Buffett's secretary would be paying taxes on ordinary income.  Ordinary income is that which one earns through their employment.   Warren's secretary takes no risk with that income; she works, gets paid, goes home and need not worry about the viability of Warren's business.

Warren on the other hand has very little, if any, ordinary income.  He works for himself.  As an investor he puts his money at risk in order to reap the rewards of investment.  When Warren guesses wrong on his investments he loses a ton of money (and, yes, Warren has indeed lost big many times; just ask him about his multi-billion dollar Bank of America investment.)

So, let's look at how Warren and his secretary are taxed.  Warren's secretary is taxed at about a net 20 percent tax rate on her $50,000 dollar income.  Warren is taxed at a 15% rate on his capital gains and dividends.  So, why is Warren taxed at a lower rate than his secretary?  Because his secretary is not putting her money at risk while Warren is putting the whole investment at risk.  This is how we reward "risk" in America.   You know those 30 million Americans unemployed?  They are only going to get employed when that "risk" money is available to hire workers!

Okay, fair enough, Warren makes billions so let's tax the hell out of him, right?  I say that's just fine with me.  However, Obama is not content to hammer the Warren Buffetts and Bill Gates of the world!  Why?  Because even if Obama took 100 percent of all income from the 1 percent of billionaires in America it wouldn't even pay one percent of Obama's spending!  Thus, Obama wants to raise taxes on anyone who makes $200,000 per year.   Are people who make $200,000 per year "fat cats?"  This pulls in the mom and pop businesses and those who work on commission where they might make that much one year and make half of that the next.  According to Obama "fat cats" are a married couple, perhaps a fire fighter and a teacher, who jointly make that much, but pay over 60 percent of their income in sales tax, property taxes, federal, state and local taxes plus social security and medicare!

These "fat cats" that Obama speaks of make up the top 20 percent of income earners and already pay 70 percent of all taxes collected!  At the same time, Obama's voting constituency, the "victim class" pay no taxes at all!  52 percent of all Americans pay no taxes despite the fact that they are taking 80 percent of all government revenue through social programs to reward the lazy, the dropouts who didn't need to attend school, the druggies who can't work cause they can't pass a drug test, the breeding moms who breed to enlarge the welfare check and illegal anchor babies who serve as the "golden horn" for illegal immigration!

It is interesting to note that Warren Buffett aspires to be "America's favorite Uncle" by talking about wanting to pay more taxes.  How many of you know that Warren Buffett is fighting with the IRS to keep from paying a billion dollars in taxes right now!  Google it!

Obama knows that the wealthy are paying huge taxes but chooses to try to start class warfare to get re-elected.  What else can he do?  He's failed in reviving the economy so he's desperate!

But I promise you this:  If you raise the capital gains tax on money Americans put "at risk" the only thing that will happen is the government will get less revenue and even more of you will be out of a job.  And if you punish small businesses with excessive regulation and taxation, they won't open that business and they won't be hiring.
Posted by A Modest Scribler at 5:00 AM

I see the picute and I find hard to accept. Income tax under the proposed plan will go from 37 to 52?? are we being really taxed 37%
I am not so sure. is that adding federal/state/city Social security and any other deduction/reduction? I fint that number ot be really high.. and if it goes to 52.. might as well take it all back.

Those highest rates are for people making $174,000 per year. Note the 52 percent is both the federal and fica taxes. Add city and state taxes and a teacher and a firefighter, married, get to keep about a third of everything they make, while 52% of Americans pay nothing. Illegal immigrants who file on the INIT program pay nothing and reap thousands in child tax credits. Read my earlier blog on this program. It is amazing. What is really crazy is that 55 percent estate tax. If implemented, it pretty well wipes out every single family farm when the head of the family dies.

Further the illegals are reaping more than 4.5 billion in fraudulent returns and while living in mexico no less. Obama's White House staff is into the IRS for about $850,000 in back taxes, and government workers are into the IRS for, I think it's 8 billion. How can you look somebody in the face and demand more money when your own house refuses to pay it. Regarding new demands for Romney's tax returns, what happened with geitner's back taxes. He's writing the law but walks while demands are made on others who have shown they have paid more than their share. No NEW TAXES WITHOUT CREDIBLE REPRESENTATION!!
Viva Revolution!!!

Hey Ken, you were too kind in your comments; you didn't even mention the massive waste, fraud and abuse in GSA, or Obama's grants to his solar industry campaign contributors, or Michelle's Spain trip, or Obama's use of Air Force 1 for campaign trips, or the $5 billion reported yesterday that went to ID thieves (242 IRS checks to one household in Michigan...need I go on and on?

P.S. Don't know if you were around when I wrote the blog "What If 50 million of us just stopped paying taxes?"....if you haven't read it, google it on my blog search box.

I did read that one, I think it was one of the first times I commented here. Then as now I strongly advocate for the tax revolt that you described. I think it is blogs like yours that will be where it is organized. I mean what is wrong with a populace that is paying so much for a service (congress) that only 12-14% of us approves of? I am a Contractor who knows if my customer is not 100% satisfied they don't pay me. So, with that said...

BTW, did you see the email from Solyndra calling the White House the "Bank of Obama"??
Keep up your good work, our country needs it!!

The other aspect of the Buffet tax scenario is that Buffet is taxed twice, his secretary only once if she doesn't make a successful investment. The question you never see asked is who pays more in taxes, Buffet or his secretary? Obama does indeed plan on raising taxes, but not on everybody. As you point out, a majority of wage earners pay no federal income tax. I would like the Dems to define "fair share" without using the term "more". They can't do it.