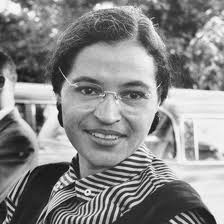 Montgomery, Alabama...December 1st, 1955, 6pm.  Christmas was approaching.  The streets of the city were festive with Christmas bells hanging from the street lights, sprites of holly decorating the store windows.  Folks getting ready to celebrate the season of Christ, who preached peace and goodwill toward men.

An attractive, rather dignified lady boarded the city bus for home.  A seamstress in a department store, she was tired after a long day of work.  As the bus moved from stop to stop it began to fill up.  The city had passed an ordinance that, when whites boarded, the first four rows of seats should be reserved for them and Blacks were to move to the back of the bus, or stand.  Never mind that the lady had African, Cherokee and Scots-Irish blood flowing through her veins; she was simply not "white enough".

When the bus driver ordered the four negroes to vacate the front four rows, three of them complied.  But the lady named Rosa was tired; tired of ten hour work days, tired of the ugliness of racial discrimination and tired of surrendering her human dignity.  She refused to move.

No doubt, beyond the affront to her dignity, were the memories of the 14-year old Emmitt Till, the kid from Chicago, who had been brutally murdered that past summer, murdered for the crime of talking to a white woman.  Perhaps there was anger as well.

Rosa Parks was a simple homemaker and seamstress.  She had no standing in her community.  She had no grand aspirations to be a social justice icon, though she had met a young minister, new in town.  She liked his message of hope; hope that America would move beyond judging a man's worth by the color of his skin.  His name was Martin Luther King.

Rosa, on that early December evening was simply tired, tired of those whites who, through some convoluted mode of thought, decided that denigrating Blacks to a subservient class, somehow enhanced their own worth.

Rosa was fired from her seamstress job when the news hit the papers.  Her husband also lost his job.  But the courage Rosa showed on that cold city bus spread throughout the African American community in Montgomery, Alabama.  Collectively the Black community walked or shared rides to work and refused to board those city buses.  And the fire from the lady's courage began to spread throughout the South.  They would battle dogs and fire hoses and billy clubs over the next few years but the courage first sparked by Rosa parks would not be extinguished.

There's a lesson to be learned here;  a lesson for all of us.  Sometimes greatness begins with the most humble act of courage.

Remarkably, Rosa Parks lived a long and productive life.  She carried no hate for whites within her heart and spoke often about the kindness of so many whites who came to her aid.  When she died in 2005 at the age of 92 she carried in her heart that same sense of human dignity that inspired so many who came after her.

Bless you, Rosa, for shaking America's collective soul,  for waking a sleeping America and showing them the nightmare ugliness of judging a human being by the color of their skin.  Bless you for inspiring a young 20 something Black minister who carried the torch you lit across the bridges of Selma and throughout the South.

And for demonstrating more class than our current President.

I've thought about her courage a lot, Randy. She showed far more courage through dignified resistance than all of those violent gangsters on Chicago's south side. They hide behind block 9's while Rosa used her pride and dignity to fight injustice. What a lady...I would have loved to have known her.

By the way, I'm always grateful that you take the time to read and comment.

I enjoy your writing, don't shut your blog down.

Thanks, Randy. We'll see how things go...most likely it won't be until after the election, if at all. Again, thanks for visiting.