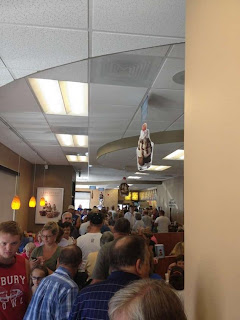 Last month the CEO of Chick Fil A dared to say that he was personally against gay marriage.  He also said everyone, regardless of race or gender preference would always be treated with courtesy and kindness in his business.  That Wasn't good enough for gays and leftist Liberals.  Last week they told him he has no right to express a personal opinion.  Liberal mayors threatened to withhold business licenses to anyone who dared to open a Chick Fil A restaurant in their cities.  Yesterday America dined out to tell liberal oppressors that freedom of expression is alive and well.

I left at 4pm yesterday to have dinner at Chick Fil A.  The nearest one to my home is at the corner of Bell Road and 83rd Avenue in Peoria, Arizona.  Heading east on Bell Road, I turned south onto 83rd Avenue and immediately noticed four Peoria police cars, lights flashing, directing traffic around the Chick Fil A franchise.   Hundreds of Americans were lined up outside the building and the line for the drive through continued out of the property and south for nearly a mile.  The entire north bound right lane of 83rd avenue was occupied with drive through customers.   I had to continue south on 83rd and try to find a place to U-turn and return to the long line of cars trying to get into the Chick Fil A outlet.

Somewhere before reaching Thunderbird Road I was able to make a U-turn and join the long, long traffic line waiting to tell liberals that free expression will not be denied.  As I waited in traffic, pro-gay marriage advocates drove by, honking their horns and yelling "Fuck You Bigot"  The phrase was repeated over and over which leads me to believe it was an organized effort.  I neither saw nor heard "real Americans" respond to this invective.

After an hour or so I finally reached the turn in to the Chick Fil A property.  As I prepared to make the turn one of the police officers noticed the military decal in my window, smiled, and walked over and said "gonna have some American dinner, huh?"  I smiled back and told him that I'm eating for freedom of speech.  He laughed at this and gave me a thumbs up before returning to traffic duty.

As the drive thru line snaked its way through the property I was able to get a better view of those waiting to go in the restaurant.  A Channel 3 news truck was on hand, filming the scene and interviewing diners.  The line was all the way around the building and Chick Fil A employees were running out to replenish huge ice filled tubs full of cold water bottles for their customers.  Temperatures were 107 degrees but weren't deterring diners from supporting a company that dared to voice support for traditional American values.  This 1st Amendment American army was huge and diverse, families with three or four or six kids, middle age folks, old folks carrying their portable oxygen tanks and single folks also.  I noticed too that Chick Fil A employees were going out to the lines and culling through them and leading those with bent backs and walking canes and on oxygen up to the front of the line and into the facility.

As the customers walked out with bags and bags of food nearly everyone of them stopped to thank the Peoria police for their presence and their efforts to keep order.  The police greeted each thanks with a thumbs up.  Soon the other customers were smiling at each other and giving each other thumbs up as well.  A few "God Bless America" phrases could be heard in the crowd.

I finally reached the drive thru window, gave my order and drove around to the pick-up window.  I expected to see a young teen, exhausted and maybe even a little surly.  When I handed over my money to a high school age girl I said "I don't know how you're doing it, but thank you!".  She laughed and said, "Sir, you would not believe what a rush we're getting from this!"."..and it's been so easy because everybody had been so nice today".

As I drove slowly out of the lot I stopped to let a family of eight cross in front of me, followed by three businessmen in suits.  I looked back at the line of diners that never seemed to get shorter...and what I saw was a "rainbow"; a rainbow of Black Americans, Brown Americans, Asian American and White Americans, all standing up against the oppression from the liberal Left.

I didn't see a single member of the "rainbow coalition".  I noticed that even the vulgar ones spewing obscenities out the car window as they drove by were astounded that they no longer were holding the higher ground.  America dined out yesterday...and they spoke loud and clear for traditional family, for the right to express our own opinions and to let others know they intended to "hold" the higher ground.

And by the way, my Spicy Chicken sandwich tasted mighty fine!

Note:  The LBGT community says they'll hold a "spit swap", same sex "kiss-in" at Chick Fil A on Friday.  That's their right.....after all  America proved today that the 1st Amendment is alive and well!
Posted by A Modest Scribler at 3:00 AM

I completely agree with the 1st amendment! And if the gay community wants to hold an event at Chick Fil A on fri I am cool with them exercising their 1st amendment. But there is one problem I see with this event. If they go in to the store and dont buy anything they can be asked to leave. They could cut off the ability of the paying customer to have access to the business. And it would be within the businesses right to ask them to leave if paying customers cant get to the the food. This will open a huge can of worms if this happens.

anon, I guess we'll see tomorrow. Other than the rabble rousers in some of the large liberal cities (as in San Francisco and Los Angeles) I don't see this being a big thing.
During my visit yesterday the gays were so cowardly all they had the courage to do was drive by and shout vulgarity.