The Starbucks Generation in Apocalyptica 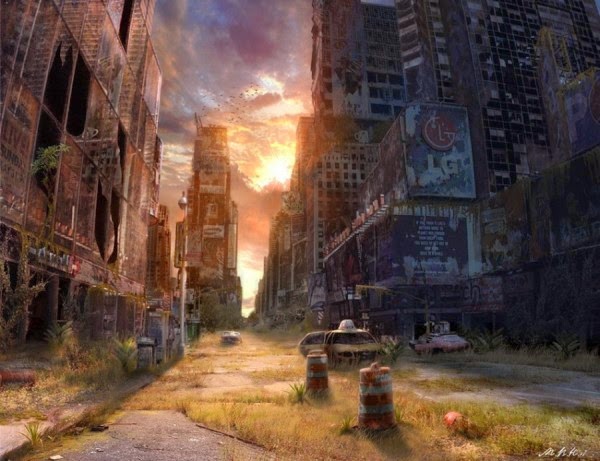 I started thinking about Breanne Fahs, one of the heroines of last week's  blogs, the quarter million a year ASU professor who advocates for the extermination of the male species.  I was just wondering how Ms. Fahs would fare in a post apocalyptic world.

As an old geezer, I think I'd do okay.  Though physically I probably wouldn't do well being sent out on patrol.  But I could man the fort pretty damn well.  I've fired expert on both rifle and pistol a dozen times.  I can load, fire and maintain an M-60 or .50 Caliber machine gun all day long.  I can fire shoulder launched recoilless rifles and 40 mike mike and mortars and can artistically toss a hand grenade when the need arises.  I can apply ten years of scouting skills to build a fire, render first aid or tie a variety of rope knots.  I can survive on ten year old k-rations and drink powdered coffee from a canteen cup and not complain about it.

But what about Ms. Fahs?  Can she survive without her morning $7 dollar latte?  Did her PHD in Gender Studies equip her to deal with a world where basic living skills are a must?  How will she fare in a forum where a naive captive audience of college students no longer exists?

Maybe Ms. Fahs can apply her current inner hate and savagery to lead a band of rogue thugs to scavenge and exploit the weak.  Maybe not.  Either way, she and her ilk would be among the first I would "take out" in the first days.  Her type would either be dangerous to the common good, or a huge drag on everyone else because they are ill equipped to survive in a world without their pampered and liberal court protected lifestyle.

Perhaps we could send the best of those who major in art appreciation, gender studies, or "introspectives on the persecution of minority groups" to a colony located on Catalina Island and leave them to forage for wild grasses and wild goat..and leave alone.

I mean, let's face it; we've got to deal with them in some manner.  We'll be far too busy "taking out" career politicians and bureaucrats to have to worry about the educational elite whose preachings were never valid in this world, much less a post-apocalyptic society.

I would be fascinated to find out how our liberal Starbucks guzzling folks would deal with Mexican illegals and Black urban thugs once their gated communities no longer protect them and their wealth no longer provides protection from the societal dregs that would slit their throat just for giggles.

Imagine what life would be like for the wealthy liberal elites, and the educational elites whose world view has never been grounded in reality, who would run head first into the hard realities of a world where survival depends on a stout set of moral principles and a viable work ethic!

Hell, Ms. Fahs might have to drink powdered coffee from a canteen cup and actually need a male to do a little heavy lifting once in a while.

sounds like you have become a follower of the Khmer-rouge !!!
They would agree with you 100%...which makes me a little nervous!

When reality hits, the gun control elite will be easy pickins'.This tune by Corb Lund Band sums it up pretty well:Gettin' Down On The Mountain.

Jerry, let me get this straight...you are more than willing to gun down litter bugs but when I voice a willingness to fight for my survival in a post apocalyptic world, that scares you?

But just to clarify, yes, if the 2nd Civil War breaks out, I'm going for those who've created the mess...and someone who advocates the complete extermination of men will be high on my list. Sorry.

Craig, the thing is, war is brutal, but it certainly does away with all the artificial bullshit that gives elites like Breanne shelter from the hard realities of life on the street.

It also clears away all the bullshit that politicians throw out there every day.

I am always amused by my urban cousins lack of understanding of what it takes to put food on the table. I have butchered cattle, hogs and poultry. I have field dressed venison and gutted and cleaned fish and migratory birds. These are not my favorite jobs, but they are vital in survival. I have a dreaded feeling that when the situation heads south, dialing 911 will be useless. I will try not to have schadenfreud, but it will be tough in some cases. I am a tough old codger out of necessity, I have crying towels that I will be passing out!

Anon, as a student of history I'm always amazed at those that think humanity is facing a new day under the sun...that societies do not crumble, that republics go on forever, no matter how badly corrupted, no matter how morally depraved.

Wise folks will begin to take a good hard look at America today. There is a level of hate and hostility that we have not seen since our nation's beginnings when we were feeling our way into trying to adhere to that very young Constitution. (I have a blog about that coming up).

If my friend Jerry (our token liberal) could sit down and talk, we could hammer out our differences and come up with a mutually satisfying way to get along. But there are left wing, wrong thinking, hard headed zealots that are too far gone. I would not waste my time even trying to negotiate with Breanne, or Nasty Nancy, or Harry Reid, and certainly not Barry.

Lesson to be learned? Like you said, be prepared to get down and dirty, master a few basic survivor skills because it looks like the next generation is going to need them.

I rarely waste my time considering the survival prospects of the likes of woman you described. The truth is that affluence breeds and encourages the emergence and continued thriving of the likes of that. It is only because of the artificial constructs a rich society can afford to create that this crap seems to thrive. Thing is, it knows no bounds - it is never satisfied and always increases the unreasonable demands to the point where even devotees (most, not all) realize "This is crazy." Like you, I own (to quote Sen. Graham) "fewer guns than I want, but more guns than I need", and my children are well versed in how to use them. I don't subscribe to the zombie apocolypse scenario, although I do believe we're in for some rough days ahead (MSM and current administration predictions aside). The irony is people like her decry Christianity, but when (not if) the SHTF, it will be that precise mentality (help your enemy) that determines whether they live or are tuned out to face that which they defended in the name of "freedom of expression". I enjoy your column - only one I read every day.

Profound thoughts there, Randy. When you began talking about the artificial constructs the elites build around themselves I couldn't help but think of kitchen countertops. Yeah, I know, kind of silly but we went from formica and tile to stone, and then only granite would do..and one has to remodel their kitchen every two years because Mary down the block did...kind of like the new car thing in the 50s and 60's.

I guess I'm a bit more pessimistic about how our future unfolds. I see no resolution to it except civil war, unless we are somehow graced with a transformational figure that will inspire us to rise above our differences.

Thanks for your loyal readership.

The comments were more entertaining than the read, great group! Now for my two cents (that always turn into twenty five bucks in small change). I despise ms fahs and I believe we discussed her a while back, she's a pig just like all those she represents and her followers, who for the life of me I just don't get. I have enjoyed Jerry since he first started coming around here but geeeez, the Khmer-rouge? Judgement's just a bit harsh, eh? We have come to a time of profound division in our country and those on the other side, whom I have spoken with, show complete ignorance of our history, laws, governance and just general make up. They don't deserve what they have here and that would place them on the same bus as the illegal alien. You asked a question, btw, that answers itself, loud! How will the latte drinking, gated community living folks deal with the mexicans, and blacks of the inner city when this falls? Easy, they hand over the keys to the mini van and tell the gate master who the new owners are, rather than get shot. Juan Valdez and his life partner, Latisha.....the mz fahz won't get shot, she will just become a gutter drunk that just didn't matter anymore. The politicians will do the same except for those who open their mouth and those will find themselves meeting a most brutal death.
You won't be wasted in the event this comes to pass. I would imagine your writing skills would be put to some damn good use as well as your marksmanship. Lord knows I have been so motivated after coming here that many a politician, liberal democrat and republican as well, heard the foul end of my pen and strong words expressing the feelings of one very disgusted, frustrated, enormously volatile American. I have never seen this country like this. I pray a civil war doesn't happen, then again, I pray it does, I want my country back, where democrats and republicans could actually have a productive discussion, not where the liberal had to resort to hateful speech and name calling because they couldn't carry on their side of the discussion. I will shoot to kill (a promise) and we will prevail because we have people on our side like the "Modest Scribler" here who brings experience and self discipline to our side. I know that I may have quite number of years but I can be taught, I don't need to be the big chief! Thanks, C-Ya in the trenches!

As always, thanks for your valuable input, Ken.