Chinese Takeout That Will "Take You Out" 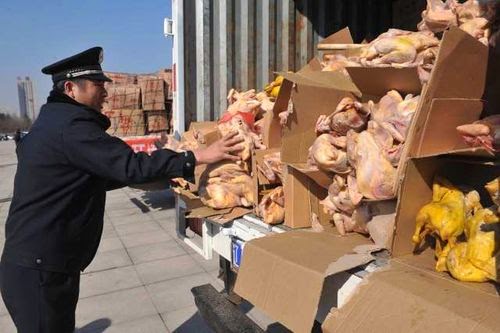 You've no doubt been reading the scandalous headlines about the Chinese clomping rotten meat into the good stuff, then sending it along to be served in Chinese KFC, Starbucks and McDonald's franchises.

This is not the first time the Chinese have been busted.  Remember all those American doggie deaths from contaminated dog food and treats?  Remember all the dead babies from contaminated Chinese baby formula?  Not long ago we learned that one shrimp farmer also ran a chicken farm.  Seems he "fed" his shrimp by washing the chicken excrement down the hill into his shrimp pond, the better to cultivate fat and juicy shrimp.

Well, let me tell you, I'm not a bit surprised nor shocked by the latest headlines.  I've seen enough of Chinese business ethics to be extremely cautious.

My first encounter with Chinese hooliganism occurred right in my little home town in California.  A Chinese businessman showed up in our town and delighted the townsfolk by opening a Chinese buffet restaurant.  Well, our unsophisticated folks flocked to the place.   It became the place to go if you wanted some chow mien or orange chicken or egg drop soup.  For ten years this Chinese gentleman raked in the money.  Then, sadly, a health department inspection found our Chinese gentleman herding alley cats into the back door of the kitchen and serving them up on the buffet line. My little community emitted a big collective gag and shut the guy down permanently.

Only recently my wife went back home to Vietnam for a visit.  During her morning trips to the fruit and veggie market she found herself being led away from the fruits and veggies being imported from China.  While the Vietnamese have never been that discriminating about their food, they certainly had problems with the Chinese stuff.  My wife said the Chinese fruit and veggies were inedible.  She said the fruit was so soaked with pesticides that the first inch or so layer of pulp tasted like it had been soaked in kerosene overnight.  At last word there was a huge boycott of Chinese food by the Vietnamese consumer.

So, I'm not surprised at all about these latest food scandals, nor should anyone else be.  While the Chinese have always been the entrepreneurial type, they've never been burdened with a set of ethics.

Chicken nuggets, anyone?  How about a quarter pounder with sleaze?
Posted by A Modest Scribler at 2:00 AM

My late mother in law worked at a little womens boutique in a mid sized shopping center.One day while she was out back having a smoke break she saw the owner of the Chinese restaurant a couple doors down buying a few deceased raccoons and over heard the delivery driver ask "What do you tell your wife?". The owners answer:"I tell her it's pork!". The birds in your hometown were probably upset at the closure of their preditor control restaurant.

Must have been part of a chain. Our chinese restaurant in Bellevue Washington back in the 80's was shutdown when the health department found hundreds of cages filled with cats in various stages of development. They said they raised them for their chinese guests only as they considered it a delicacy. Being raised in the kitchen went against our customs and laws at the time and fortunately it was politically correct to stop them from the practice

Craig, Ken, I'm never surprised by these Chinese horror stories. My wife will not go into an Asian restaurant...doesn't trust them and knows she can make any dish they're offering better, healthier and without health risk.

I'm lucky that I don't have to frequent Asian restaurants to get my fix.