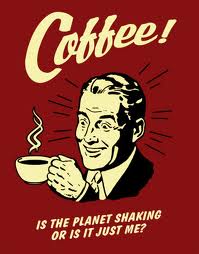 A Golden Oldie From My First Year of Blogging:

Okay, the news just came out Saturday that coffee and sex can trigger heart attacks and strokes.  Researchers weren't clear on whether these cataclysmic events occurred when patients were drinking coffee while having sex or if coffee and sex in moderation also contributed to what old Fred Sanford would call "the big one".

I've decided not to worry about it.  Here's why:  In my lifetime I've read that saccharin causes cancer only to have that refuted by the same researchers ten years later.  For a couple of decades we were told that eating eggs will clog your arteries; that assertion too was retracted after further research.  For two decades we were told that drinking whole milk will defeat any weight loss diet but are now told that drinking a couple of glasses of whole milk each day is actually highly beneficial for those seeking significant weight loss.  And it was not even a month ago when researches at John Hopkins asserted that drinking coffee helped to prevent bladder cancer!  Given a choice between the bladder cancer survival rates and those from a heart attack, I opt for my cup of Joe!

While I greatly admire all of the great health research being carried out in this wonderful country I'm not ready to surrender my lifestyle to capricious and superficial assertions regarding a particular food or drink item.  I will also tell you right off that I know damn well how many calories are in a Big Mac and those little red mini-buckets of McDonald's fries.  Though I don't eat fast food that often no government-mandated nutrition banner hanging over the counter is going to deter me from my rendezvous with a great cholesterol clogging meal.  While I truly believe this Fast Food nation is digging its own grave with fast food, unlike the liberal Nazi's that mandate nutrition info, I don't believe you can scare folks away from fast food with nutrition "warnings".  First of all, if we can believe statistics, since 25 percent of American high school grads are illiterate, the liberal nannies start with a huge attention deficit!

If you really want to curb the consumption of unhealthy fast food all the government needs to do is mandate a ten dollar co-pay to those millions of Americans on free Medicaid who, by federal Medicaid law, cannot even be billed for a missed appointment, much less a co-pay.  This "skin in the game" initiative just might trim the 22 percent of American youth who are now classified as obese and type 2 diabetic or pre-diabetic.

Back to the sex and coffee matter.  I expect it won't be long before the Feds begin mandating a consumer warning on every can of coffee; "Attention; medical research has determined that drinking coffee can lead to heart attack and stroke".  If this warning doesn't work the next FDA-mandated coffee can warning will read: "Please refrain from drinking coffee while having sex".  That one I can live with.
Posted by A Modest Scribler at 2:23 AM

Coffee and sex can be disastrous, very difficult to get coffee stains out. jo

But what do you do with the latte??

Whoa, grenadvet...I'm not touching that one.

What about coffee, sex and a Big Mac and fries all at once? Any and all things in moderation is freedom and fun.