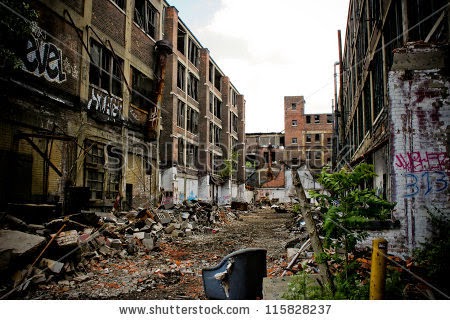 Last week a humanitarian delegation from the United Nations (you heard me right) marched into Detroit and demanded that water service be restored for some 20,000 Detroiters who had their water service cut off for not paying their water bill.

It seems the UN intervention was prompted by several "call to action" groups, including the NAACP,  who have formed in Detroit demanding the right to get something else for nothing.  Here's the problem.  Once, long ago, when Detroit's Black municipal leadership deemed the once private water service too greedy they more or less "nationalized" it....seized it and began running the water service themselves.  Well, like everything else in Detroit, they didn't do a very good job.  They paid their meter readers $50 dollars an hour and granted full retirement at 20 years, and if the water was a bit stinky, and if the water pipe maintenance wasn't quite up to snuff, well at least the city workers were happy.

Well today, Detroit's municipal water service is $6 billion dollars in debt.  And because bankruptcy rules will no longer let its Black citizens "run a tab", they were forced to cut off service to over 20,000 residents who were more than 60 days behind in paying their water bill...and this after federal subsidies were already affording lower water rates than anywhere else in the state!

You see, there's not much left from the welfare check after paying for your drugs and your booze and the gas you need to drive around the city killing White people and burglarizing abandoned homes!  It's tragic!  So the water bill becomes the last thing you worry about, right?

Well the city tried their best.  Even as they were cutting off water service to deadbeat homes, they were still running water trucks throughout the city and staging water bottle distribution as well.
But that wasn't good enough for the National Association for The Advancement of Colored People...no,  water is a right!  And who better to enforce those rights than the United Nations!

So the UN negotiators met with the City of Detroit negotiators and they came up with a temporary halt to the water shut-offs...until August 25th.  The city is even holding a "Water Fair" on the 23rd of August where folks can come in, enjoy hamburgers and hot dogs and, yes, bottle water, as they sit down with city accountants and settle up their past due water bills.

You know, when I think of Detroit these days, I think of one of those National Geographic films, where a pack of hyenas bring down a gazelle and begin ripping at the carcass and feeding off of it.  For more than 70 years Detroit's Blacks and Detroit's unions fed off the most vibrant industry this nation ever had; the auto industry.  At one time Detroit was selling 90% of all the cars in the world.
Then the unions got lazy and bogged down in union worker restrictions and they got greedy and line workers wanted to be paid like business executives, and the city both supported that greed and demanded a huge chunk of that industrial prosperity until, finally, the last "gazelle" was hunted down and killed.

So the auto companies moved to Mexico and Spain and Canada and Tennessee and South Carolina and Alabama and China and Detroit is the biggest urban ghetto on the face of the earth.

And this week the NAACP and the liberal/communist groups in Detroit proved they haven't learned a thing...from bankruptcy, from urban decay, from massively failing schools, from rampant crime, from ethnic hate (yeah, Whitey hate.)    Instead of standing up with pride and paying what they rightly owe, they turn to the god-awful United Nations who can certainly teach them a thing or two about communism and socialism.

You know, if you look at the map, Detroit is right up there, not far from our northern border.  Perhaps we can cede that hell hole to the UN and let them set up some kind of "communist protectorate" like Cuba or Venezuela.  I don't think I'd mind that one bit.  And could they please take Chicago with them?

First we need to let the un have Detroit and move their headquarters there. Remove our Country from the un,tell them they are not welcome on American soil and to have a nice day.Wonder how long it would be until the naacp wanted forgiveness and Detroit wanted back into the US?

Oh yeah, Craig...I'm all for sending that life sucking, useless organization anywhere but here...and would love to see us stop supporting it.

As for Detroit, well, that's a lost cause.

Yes, embarrassing that we could be so stupid! and we haven't learned a damned thing. Even in my little town
it is 20 years of service for City Workers and retirement with 90% of wages and benefits forever! I wonder where that money comes from?

Jerry, it's a four decade old pyramid scheme and now the bill has come due.

You're right, happening all over America...it's the easiest way for politicians to win favor with the municipal employees which aids their reelections.

The really sad part of all this is ignoramouses like all of us conservatives have been predicting the deaths of these industries and their supporting infrastructure many years before it happened. Ah, but alas, it fell only on the deafest of ears. As long as everything is moving along don't worry about it. Now we quickly move to third world status, but everyone laughs at that saying your kidding right, we are the richest nation on earth! Remember those words when I say "I told ya so!"
Btw the county I live in was pounced upon by the SEIU some years back and now county employees and that includes the elected officials who voted for this stuff can start collecting a fifty percent retirement after five years and a full one hundred after twenty years. The coffers are now empty and we're financing all this stuff while the police announced they will not send a cop to an assault complaint or burglary and many other violent crimes where no one is killed. But bit your tongue, we are not moving toward third world status WERE RICH GODDAMN IT!!

Oh yes, Ken..the "police shortage" gambit....when all else fails scare the hell out the taxpayer so he'll cough up more dough willingly. Not mentioned are the bureaucratic trolls who read your meter, or sit on their ass in city hall, and the other no goods.

Great Story Dearel! Now watch St Louis then Atlanta, Philly, all the Ohio towns with lots of black people follow Detroit straight back to the jungle because all the white people packed their life into a moving van and left. Is there one single black community in all the USA or world for that matter that has their shit together? In 200 years people will admit that the black folks are inferior and need special help but if you even say such a thing now even in the face of all this evidence you are labeled an evil racist.

Flying goat roper; for some hundred years before LBJ's Great Society giveaways Blacks did pretty damn fine on their own....google the poverty rates in 1950 versus now. After spending some 100 trillion dollars in federal and state and local taxpayer dollars the poverty rate for Blacks is no better than it was when they were on their own.

One cannot argue with the facts you present; but the auto industry management contributed to some of this mess. They believed that American cars would rule the world; refused to upgrade technologies; and were complicit in the labor negotiations believing they would simply pass this cost onto the consumer.

The United Nothing needs to take a long walk off a short pier. When I was a high school student, back in the 70's, the standard 'crap' that was served up in civics class was that diplomatic solutions would fix problems so there wouldn't have to be anymore wars. (What a load of shit!)


Today, we have more wars all over the world than we ever did before this sorry ass collection of communists came into existence.

(And all they really do for all cash they 'hemmorage' out of this country is trample our constitutional sovereignty.)

We need leadership in DC to finally stand up and say "we're canceling our membership, you're not getting anymore American cash, and you have 30 days to pack up your shit and leave US soil, or in 31 days, our military will relocate all UN personnel to the nearest container ship heading for Beijing.

Sadly, this will probably NOT occur until America has concluded its 2nd revolution. (assuming, of course, she lives long enough.)